I'm taking a writing class online to try to revise my novel and make sure I'm working on my "craft" as we say. The course is called "The Character-Driven Novel," which sounds like the kind of writing I do and want to do.
Here's the thing, so far, most of the class has been analysis of my novel. It's filled with questions like main character's Inner Conflict (IC) and Outer Goal (OG)and where is Turning Point #1. Ugh. I hate that.
I can't imagine that F. Scott Fitzgerald ever went through a novel thinking that the first turning point came a little late and he needed to nudge it back toward the beginning of the novel. 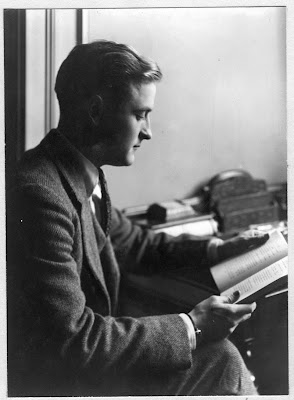 Here's F. Scott Fitzgerald suddenly realizing that the second turning point for Tender is the Night came at 80 percent of the novel rather than the recommended 75 percent. Damn. Now he'd have to write it over.
Photo from http://www.unc.edu/~wellons/images/fitzreading.jpg

Isn't timing something that a good writer should be able to feel without plotting every step and misstep?
Although I'm nowhere near an F. Scott Fitzgerald, why can't I just write a great story with great characters and leave it at that? Why do I need to follow the formula? I want book groups to analyze my novel; I don't want to do it. Do you think that means I have underlying issues in the book that I'm not willing to fix?
In the writing world, I'm what is called a pantzer instead of a plotter. That means I write the story by the seat of my pants without planning it ahead of time. A lot of the time I don't even know how it ends.
My current novel which has had a working title of The Summer of France and Ransoming Raphael started as an idea for a novel about a couple who goes to Mackinac Island in Michigan to run a bed and breakfast. I was going to call it Fudge Ho since Mackinac is famous for its fudge. Next I changed the idea to have the couple run a b&b in France. Then the World War II idea and the stolen art seeped into the book. The novel evolved in ways it wouldn't have if I'd plotted it out ahead of time.
Rules make me itch. I hate having a Triptick that I need to follow when I travel or when I write. So going through this formula and finding places in my novel that match the formula feels like plucking eyelashes out one by one.
Soon I'll be blinking baldly, eyelashless at my novel.
Will I need to make changes in my novel? Always. Will I need to follow the formula, the one that splits a book or a movie into three acts? The one that every successful book or movie follows? That's something I'm still wrestling with.
at March 23, 2011

Though I am sure someone somewhere might benefit from formula writing, I have never actually heard an author speak of writing in that way. I have, however, heard authors say exactly what you do about writing their novels - that they have an idea but no plan - that the novel unfolds as they write - that they don't necessarily know how it will end.

Leave the eyelashes alone, I say.

In the book The Right To Write by the lady who wrote the Artist's Way, she talks about how much more sucessful writing is as you just open yourself to your story and let it sort of write itself without thinking of plots, etc. Then you go back a fix things but the great things come from your unconscious. I don't write fiction so have no helpful hints.

I always wondered how writing a novel is actually accomplished. Sounds like the answer is many ways.

Love the comments from Stephanie and Linda.