We were dogsitting this weekend for Earl's niece's dog. She and her husband went to Philadelphia for the weekend and asked if we could drive up to let the dog out three times a day. 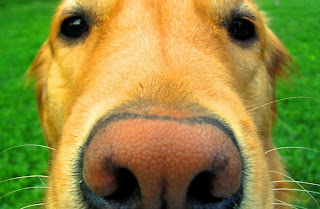 We said we'd just bring the dog to our house. Her name is Hannah and she's a beautiful creamy cinnamon color with a tail that curls up and around. She's about two years old. She jumps a lot, which leaves her skinny. She's medium-sized, coming up to my knees and she's a mutt with a longish snout. Sounds simple enough, right? Well, three incidents convinced us that Hannah may be a danger. Here's where I need your advice. Do we tell Earl's niece that her dog is antisocial in hopes of protecting future children and visiting pets?
Tucker and I brought Hannah home and the cats immediately took to the high road, climbing on the mantel and window sills to avoid the dog. Hannah barked at the cats, but seemed much more interested in hanging with the humans.
Saturday morning, Earl and I walked down to the post office to mail a package to Grace. Then we stopped at Caribou Coffee. We couldn't take Hannah inside so we thought we'd stop by Sheila's house to warm up.
Sheila has a dog about the same size as Hannah, but her dog is named Little Ann. Little Ann did not seem too thrilled for Hannah to visit. They sniffed each other for a few minutes and Ann began to gather her toys so she didn't have to share them with Hannah. After a few minutes, Ann climbed up on the couch next to Sheila. As we talked, the dogs settled down. Then before we could move they were snarling, teeth bared then biting. We grabbed Hannah's collar and pulled her back. Our visit ended there until Sheila texted me that evening to say they discovered an inch-long gash on Ann's belly. Hannah had drawn blood. 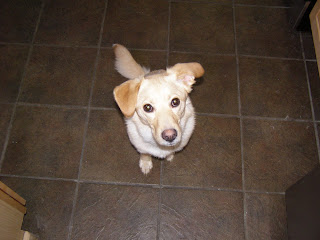 The neighbors have a dog named Rocky. Medium-sized, but furrier and sturdier than Hannah. Hannah and Rocky met through the fence. They ran back and forth along the fence barking at each other. The neighbor suggested we bring Hannah over to play with Rocky. Earl took her over and the dogs ran and barked for a few minutes. Then snarling and biting ensued. The neighbor was yelling at the dogs and Earl was afraid Hannah would bite him. He dove into the dog pile, which happened to be in a rosebush, and pulled Hannah away from Rocky. Earl came away with a gash from the rosebush. Hannah had drawn blood again, although inadvertently this time.
Earl and I sat on the couch discussing the dog incidents. He suggested that Hannah is an alpha dog and tries to dominate even when she is on another dog's turf.
Tupi had climbed into my lap. Hannah came toward Tupi and got too close. Tupi reached out and swiped the dog's nose. He didn't draw blood or leave a mark, but Hannah yelped and jumped back then came toward me and Tupi with her teeth bared. Earl yelled. I mean really yelled and pulled the dog back.
Usually, when a dog gets swiped by a cat, it backs off. Hannah instead moved to attack.
We returned Hannah this afternoon, leaving her in her kennel in the family room before Earl's niece and husband flew home. She called and told me they were home and asked if everything went okay.
"It was fine," I said. "She didn't get along with the cats." We both laughed.
I know. Grace has already told me that they need to get busy socializing the dog before she gets older. But they're a young couple without kids and their dog is their baby. I especially didn't want to go into a litany of the dog's misbehavior when they were just off the plane.
So what do you think? Do I call them and non-chalantly give the details. Do I say I'm worried about the dog and go into details? Do I just let it go and refuse to keep the dog next time?
We always had kids climbing all over our dog. She knew she was at the bottom of the pecking order -- even under the cats. She barked a lot, but I don't remember her baring her teeth at anyone or another animal.
Is Hannah a danger to other animals or people, especially children? Do I tell the niece?
at March 27, 2011

I wonder if her antisocial behavior had anything to do with the fact that she was out of her element? Would she behave that way at her own home or with her own family around? I don't think it would hurt to mention your observations.

Yes, yes, yes --I think her owners need to know what happened. I could happen to a child potentially if not addressed, so the better informed they are is impt.

What a weekend you had!!!

My son had a dog like that. It never went after a human, only other dogs. I don't think training will do much good personally. I'd tell your niece though.

I think you need to tell them about this. I have had some experience with dogs like this and they can be a danger around small children who are closer to their size and less predictable. I don't know if this can be trained out of them, but as "parents of a small child", they may be blind to his problems and too permissive with his behavior. Good luck. It's not easy to bring up something like this but it's better than the possible tragic alternatives.

I'd bet anything they've experienced similar situations. So maybe the discussion would help them to see that its not okay behavior ...