My life has been crazy so I haven't been blogging regularly.
People say, "Oh, too many classes to teach?" But really, most of the craziness comes from my kids.
We knew when Tucker was born (our 3rd) that we had surpassed our limits as parents, but it was too late to go back; we could only go forward. And, we love all of our kids passionately (which might be part of the problem), but their worries and woes frequently weigh on us and take a lot of time.
Problems are working out and in the next few days, I hope to spill the whole story about an incident that made me feel like I was living out an episode of The Sopranos.
For today, I'm enjoying the knowledge that I don't have to go to work today because it is finals week for one of the colleges where I teach.
I also relished a 6-mile run that ended at Starbucks.
Mostly though,  my happiness comes from the fact that I'm very relieved my youngest son has chosen a college that is within a two-hour drive. He was leaning toward a college eight hours away and I had to beg him to reconsider.
When Spencer's phone broke, it took a tremendous amount of effort and calling in favors from old friends in the area to get him a new phone while he lived 16 hours away and had no way to communicate or get to the store.
When Grace was sick at school 10 hours away, she had to walk herself to the hospital for blood tests and walk herself to the pharmacy for medicine.
Yes, it helps them learn responsibility, but it leaves me a nervous wreck.
Tucker knew these stories and stuck to his plan to attend Mizzou -- the University of Missouri.
When we visited, I didn't even think he like it that much. He was anxious to get back on the road home. 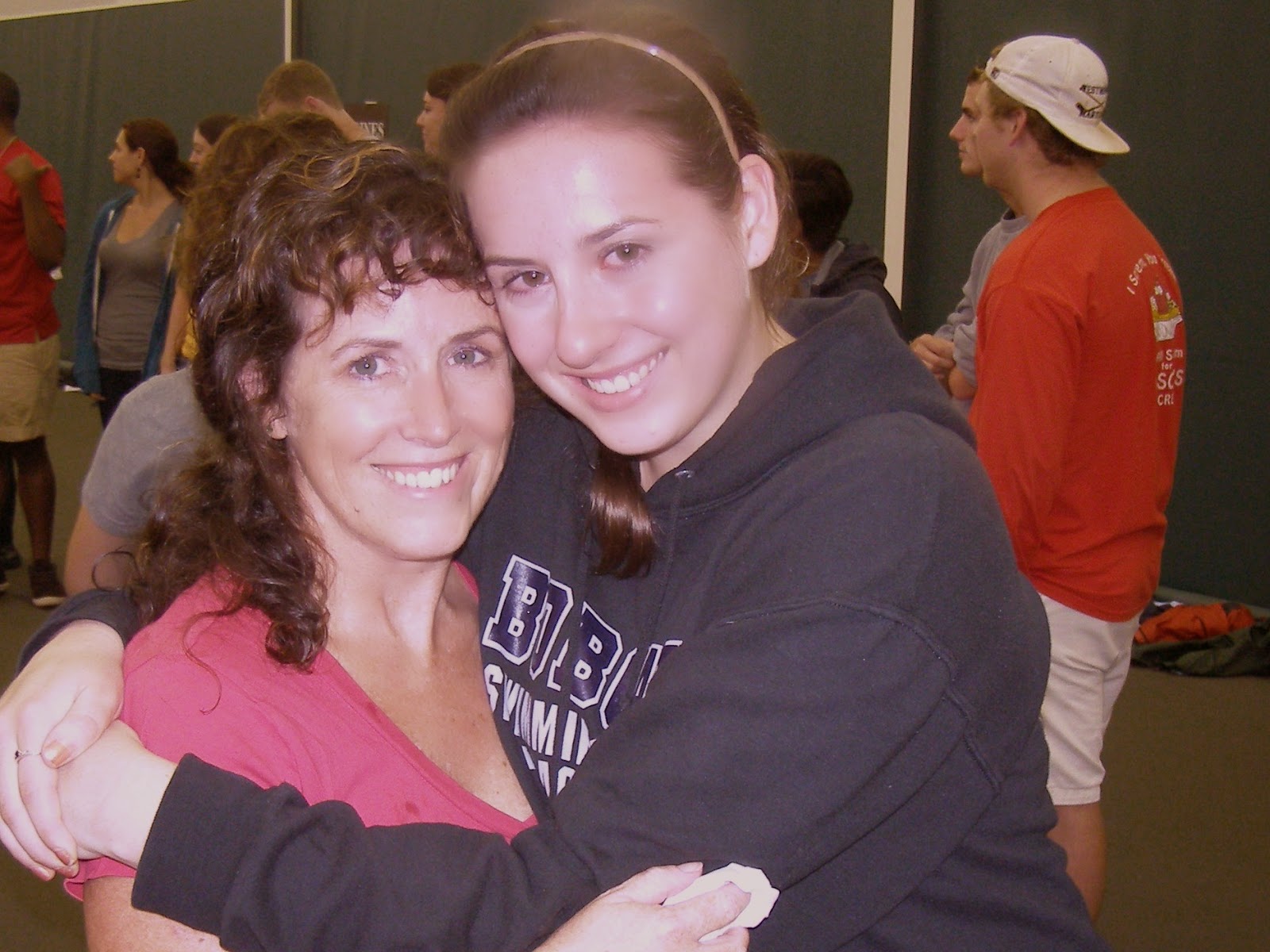 And we have no contacts in Missouri -- no old friends to call on, no family to fall back on.
Finally on Tuesday, I told him the story about leaving his sister and brother at college.
It wasn't as bad with Grace because the college, 10 hours from home, had a plan. They had a convocation, complete with bagpipes and lit candles. Then each dorm broke up into groups to begin activities. Parents were expected to give hugs and move on to the parking lot.
I'll never forget Grace's eyes bright with tears as she stood in a circle of her dorm mates then turned around and gave us a pleading look. We walked out, but that was easier than when we left Spencer. 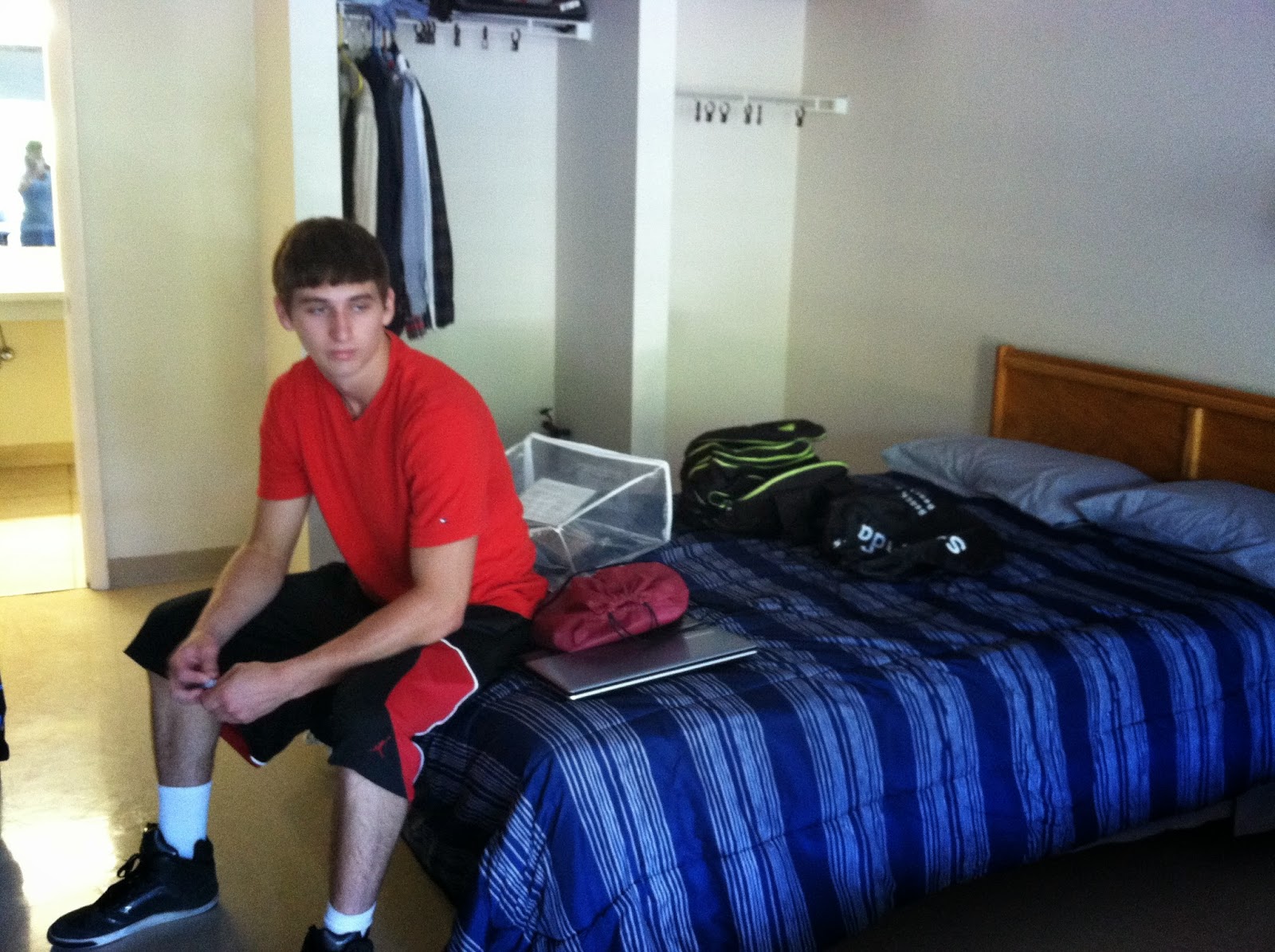 We moved Spencer into his college dorm room over 1000 miles from home. The school had a convocation
ceremony and then a picnic. We ate. We talked with families around us and then we needed to move on to my parents' house about 90 minutes away. Spencer walked us to our car and we left him there in the parking lot -- alone.
I just couldn't do that with Tucker.
"I know you'll make friends," I told Tucker, "but it's so hard on my to leave you there alone."
Tucker didn't respond to my story so I dropped it.
I had told him he needed to figure out what steps to take next for going to Mizzou. I had to support him.
Two days later, he said he guessed he could go to a college in Ohio. He would room with his best friend Josh and the two of them would have two unknown roommates so they didn't get stuck in a rut with only kids from our hometown.
"You can go to Mizzou," I said. "I don't want  you to choose just for me."
But he had talked it over and they made plans and the relief I felt washed over me. He can catch a bus home for $10. I can be there in two hours if he is hurt or sick. I can drive down a new phone. Or I can go down for lunch if he, or I, feel lonely.
So today is full of paperwork, making sure he accepts the school's offer. I also have to grade papers and get final grades in. Look into changing our insurance company. Deal with some payments to Spencer's schools.
In spite of the busy work, underneath it all, I'm so happy that Tucker won't be going far away.
at April 24, 2014

I hope you life calms some in coming weeks. It is never easy to leave our children. And guess what, it doesn't get a lot easier in my experience. My kids are 45 & 49, married with children and grandchildren and I still worry. Such is the life of a mom!

That is not encouraging, Judy! I figured once they marry I might be able to relax.

It sounds like he made the right choice for him (and it's a side benefit that it will ease your worries as well!). That said - I went to Mizzou and loved it so I'm sad he won't be going there :) Just kidding. Since I'm from St. Louis I thought it was perfect - close enough that I could come home on the weekends but far enough away that I had my own life and had to be an adult. A lot of my friends from high school went there but I also met a lot of new people that I'm still friends with today. So I'm sure it will be similar for your son being 2 hours away. Best of luck!

Wow this all I have to look forward to next year! Your a good mama! I just spent two days going through the process of changing our car insurance! I have a two day headache now!

The car insurance is one thing I haven't gotten to yet today. Grace threw me a curveball. I'll post on that later.

Great news that your son will be not too far away in the fall. exciting yet still reason for some anxiety I am sure.

dear,
website author
As you and your children research, investigate and visit colleges that may be of interest, you will find that each college has a different look, feel and appeal. To help ensure that you and your children make clearly focused decisions, you can use the information that follows to rank your choices.
see more details: college