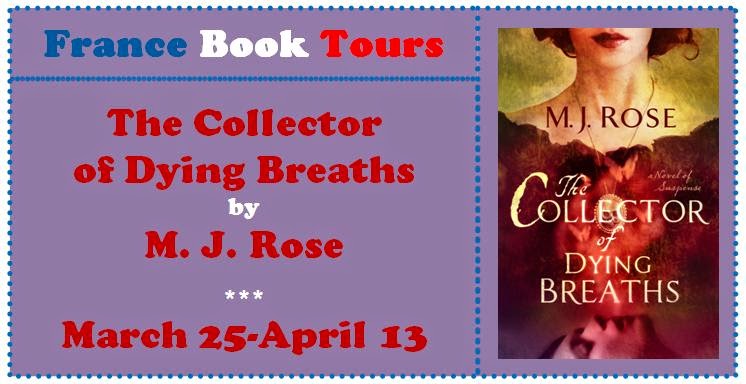 Today I'm reviewing The Collector of Dying Breaths by M.J. Rose for France Book Tours. The name of the author may sound familiar because I interviewed the author and reviewed another book by her last May. Here's my interview after she wrote Seduction.
Although reading the previous books are not required, this book follows those same characters in Paris, as Jac L'Etoile, a woman who has fought against her past-life experiences, tries to discover why her brother died mysteriously. She takes over her brother's research of a famous French parfumier, René le Florentin,
and his hope to bring people back to life by saving their last breaths. The novel is told in present time through Jac and through the parfumier in the 1500s, under the reign of Catherine of Medici in France. René le Florentin collects bottles of breaths of those he loves in the hopes of continuing his mentor's work.

I watched the shallow rise and fall of his chest. Listened to the rattle of his breath. As his student, I had memorized all his instructions. I had seen him perform this duty but had never done it myself.
His quest was to capture a person's last elusive exhalation, to collect his dying breath, then to release it into another living body and reanimate that soul. To bring it back from the dead.

I could see in the 1500s that someone might not have dealt with the ethical issues of this, but it would be a little more difficult in present day. Still, they're fascinated by the idea, especially Melinoe, a Greek heiress who buys whatever she wants and had hired Jac's brother and then Jac to solve the mystery.

Mostly though, this is a story about love and how we often sabotage ourselves. Whether the novel is in present day or 16th century France, love is the most important ingredient.
The sensory details in this book are so rich and the plot is extravagant as well.


There it was again...that timbre in his voice that fitted the way he had looked at Melinoe -- no gazed at her. Up til now, she guessed that it was lust. She heard it so clearly now in his tone. It was in every syllable of how he spoke her name. his voice deepened around the word, which slid out as if he were forming it carefully, feeling every syllable with his tongue.

It took me a few chapters to get hooked by this book, but now that I know how it ends, I've gone back and read the beginning chapters again. It all ties together so well. The clues were there from the very beginning.
Definitely an intriguing read.
Here's a synopsis from the publisher:
From one of America’s most imaginative storytellers comes a passionate tale of love and treachery, spanning the days of Catherine de Medici’s court to the twenty-first century and starring a woman drawn back, time and again, to the past.In 1533, an Italian orphan with an uncanny knack for creating fragrance is plucked from poverty to become Catherine de Medici’s perfumer. To repay his debt, over the years René le Florentine is occasionally called upon to put his vast knowledge to a darker purpose: the creation of deadly poisons used to dispatch the Queen’s rivals.But it’s René’s other passion—a desire to reanimate a human breath, to bring back the lives of the two people whose deaths have devastated him—that incites a dangerous treasure hunt five centuries later. That’s when Jac L’Etoile—suffering from a heartache of her own—becomes obsessed with the possibility of unlocking Rene’s secret to immortality.Soon Jac’s search reconnects her with Griffin North, a man she’s loved her entire life. Together they confront an eccentric heiress whose art collection rivals many museums and who is determined to keep her treasures close at hand, not just in this life but in her next.Set in the forest of Fontainebleau, crisscrossing the lines between the past and the present, M.J. Rose has written a mesmerizing tale of passion and obsession. This is a gothic tale perfect for fans of Anne Rice, Deborah Harkness, and Diana Galbadon
at April 09, 2014

thanks for your neat review! glad you liked it. her books are always nicely intriguing indeed

Fascinating. I love reading book reviews since I haven't the time to actually read the book. As always, I enjoyed this review. Thank you.

This one went on my wish list but still haven't read it. (I can say that about a lot of books lately)