Every Tuesday, Diane at Bibliophile by the Sea posts the first paragraph of her current read. Anyone can join in. Go to Diane's website for the image and share the first paragraph of the current book you are reading.
This is a book I haven't started yet but it's next on my list. Together Tea by Marjan Kamali. 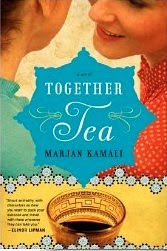 As the main character, Mina, turns 25, her mother decides to find her a husband. Growing up in New York, Mina does not understand her Iranian mother. The two travel to Iran together to grow closer.
Here's the intro:


Mina was half-asleep when her mother, Darya, called to say that she'd found the perfect gift for her twenty-fifth birthday. "His name is Mr. Dashti," Darya said almost breathless on the phone. "Two degrees. A PhD and an MBA. He's a descendant of the third cousin of Reza Shah. He lives in Atlanta. Has perfect health. The nicest teeth. He'll be here on Sunday afternoon for tea and questions. Please, Mina, no tricks this time. I've done the numbers. And wear the lavender dress with your new belt."

Also this week  is Teaser Tuesdays. Teaser Tuesdays is a weekly bookish meme, hosted by MizB of Should Be Reading. Anyone can play along! Open to a random page of your current read  and share a teaser sentence from somewhere on that page. BE CAREFUL NOT TO INCLUDE SPOILERS! Share the title & author, too, so that other TT participants can add the book to their TBR Lists if they like your teaser.
Here's my teaser from page 63:


The river reflected the streetlights, and all Mina could hear was the passing traffic on the Drive. As she jogged along Riverside Park, Mina saw Mr. Dashti's doughy hands holding his tea and his look of hesitation when their eyes met. Of course he was like all the other men: well educated, polite, careful. But there was something different this time. Maybe it was the palpable relief she saw on his face when they didn't click. The sense that he was equally lost in this messy matchmaking business. He didn't want it either. Poor Mr. Dashti was just as stuck as she was.

Thank goodness I never had to deal with match-making friends and relatives.

Just Me, So glad I'm helping to fill your Kindle! It will be like we're reading a book together.

This one sounds cute! I think I'd keep reading. I'll have to go check it out for only $1.99!
I'm spotlighting Mrs. Lincoln's Rival today.

The mother is definitely overbearing. I like the teaser though. I'd keep reading.

I would definitely keep reading. I love books like this, especially the conflict in culture issues.

Sounds like an interesting and entertaining book. It would be fun to visit another culture.
My Teaser is from WITHOUT A TRACE.

I would continue, my husband originates from a culture where arranged marriages are common and whenever we visit we get asked 'oh so you had a love marriage!' :)

Love that intro, and would definitely read more --enjoy

This sounds so interesting! Meddling relatives can be so entertaining and frustrating at the same time. Thanks for the teaser. And thanks for stopping by!

that sounds like the beginning of a very interesting story. thanks so much for dropping by today. kelley—the road goes ever ever on

I like this one. I can't imagine a mother who is so openly matchmaking.