Every Tuesday, Diane at Bibliophile by the Sea posts the first paragraph of her current read. Anyone can join in. Go to Diane's website for the image and share the first paragraph of the current book you are reading.
I picked this book up, The Pretty One by Lucinda Rosenfeld, yesterday and read through the first chapter loving it. As I kept reading through the evening, it lost some of its luster. I hope it picks up again. 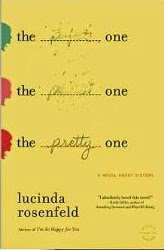 
Olympia Louise Hellinger had always been the "Beautiful One" in her family. Among her sisters, she was also understood to be the Artistic One, the Flaky One, the Chronically Late One, the Mellow One, the Selfish One, and the Unambitious One. Whether reality reflected reputation was a matter of opinion. But at thirty-eight she was the events coordinator of a small museum of contemporary Austrian art, located on the Upper East Side. She was also a single mother. Little wonder that, as much as she loved spending time with her three-and-a-half-year-old daughter, Lola, she also longer for more hours to herself.

The book is about three very different sisters and their relationships.
Also this week  is Teaser Tuesdays. Teaser Tuesdays is a weekly bookish meme, hosted by MizB of Should Be Reading. Anyone can play along! Open to a random page of your current read  and share a teaser sentence from somewhere on that page. BE CAREFUL NOT TO INCLUDE SPOILERS! Share the title & author, too, so that other TT participants can add the book to their TBR Lists if they like your teaser.
Here's a teaser from page 56:


Twenty years later he'd found her on Facebook and sent her a message that said, Yo Hellinger, what's up? Still think of the GREAT TIMES we had together. Things had escalated from there.

Reconnecting with an old love on Facebook after 20 years, when she is married with three kids, does not bode well.
at April 29, 2014

I like stories about sisters and would keep reading. Hope it picks up for you.

I do love the sound of this one...and what lies ahead for the women in the story. Thanks for sharing...and for visiting my blog.

I do hope the book picks up again as the intro sure sounds promising!

Love the intro/teaser. I would pick it up!

I really like the opening. Hope it picks up again for you.

Yeah, I can relate to the reconnecting with old friend's theme. Happy reading.

It's amazing the connections that can be made through Facebook! This sounds like a fun story. I hope it picks up soon.
My Teaser is from A SLIGHT CHANGE OF PLAN.

It sounds both clever and creative. I like all the names used to describe the character. Yes, I'd read more.

I like the intro, so I would be reading more -- hope it's a good one.