Last night was the final year I'll have to rent a tuxedo for prom. Yes, I'm happy about that because it is ridiculous to pay $145 to rent a suit for one night.
Maybe next year, when I have no children going to prom, I'll be nostalgic for prom.
Tucker is still asleep downstairs, but his few words of description assured us that he had a good time.
Before he left, we took a picture of him with Grace holding the cat up beside him. 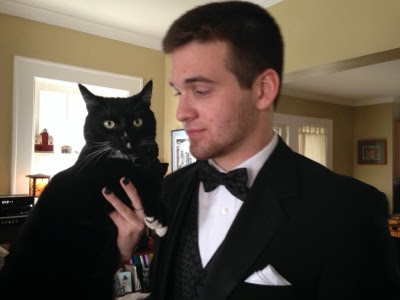 The prom theme was masquerade, so Tucker ordered a mask online and reluctantly held it up for me to take a  picture. Tucker and his friend Alex met their dates at one of the girls' houses for pictures. As a man of few words, Tucker was reluctant to let me know where and what time pictures would be. I finally texted the mom of one of the girls and got to the picture house before Tucker did.
I joked that Tucker is one of those people who believes that having his picture taken will steal his soul. I can't figure out why else he's so reluctant to have his picture taken. Luckily, in front of other people, he's willing to pose and stand still. 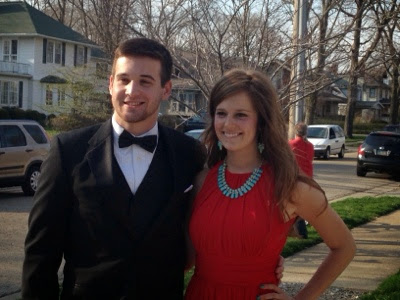 Here he is with is date Amelia.
She had on a gorgeous red dress with turquoise jewelry. She rented the dress. She actually rented two dresses for $95 then decided which one to wear. She wore the dress by designer Badgley Mischka, which would probably have cost more than $1000 to buy. She rented from an online company called Rent the Runway. I think this is a great idea, although we always found dresses for Grace to buy that were less expensive than the tuxes we rent. 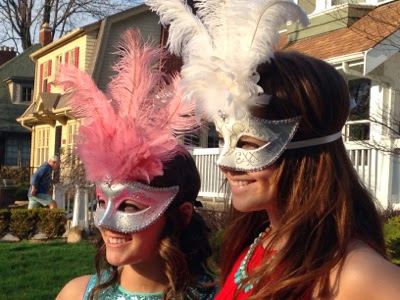 The girls had some elaborate masks. Here's Tucker's friend Josie on the left and his date Amelia on the right. 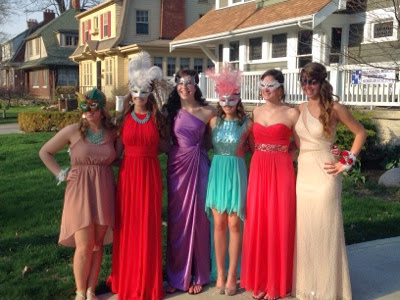 Here are all the girls with their masks. I always love to see the girls' elaborate dresses. 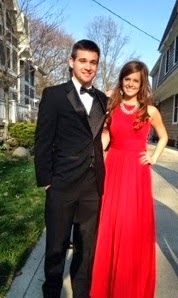 And one more shot of Tucker and Amelia.
I hope it was a senior prom to remember.
at April 13, 2014

Love the prom photos! Your son is very handsome...and when he is off to college, or wherever, I'm sure you will feel nostalgic for prom.

What great pictures and the dresses are lovely -- especially the red one.

Very pretty & handsome…all! Glad they had a good time!

Just pure brilliance from you here. I have never expected something less than this from you and you have not disappointed me at all. I suppose you will keep the quality work going on.
If you want to learn more about this site: Prom Dress