Every Tuesday, Diane at Bibliophile by the Sea posts the first paragraph of her current read. Anyone can join in. Go to Diane's website for the image and share the first paragraph of the current book you are reading.
Continuing my obsession with France, and looking for a bit of an escape, I'm starting The Chocolate Touch 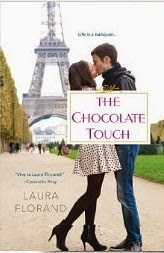 by Laura Florand.
Here's the intro:


"She's back."
Dom straightened from the enormous block of chocolate he was creating, gave his maîtresse de salle, Guillemette, a disgruntled look for having realized he would want to know that, and slipped around to the spot in the glass walls where he could get the best view of the salle below. He curled his fingers into his palms so he wouldn't press his chocolaty hands to the glass and leave a stain like a kid outside a candy shop.

I'm not too sure about the plot for this, except it's about a woman who eats chocolate and a man who makes chocolate and it's set in Paris. What else could I ask for?
Also this week  is Teaser Tuesdays. Teaser Tuesdays is a weekly bookish meme, hosted by MizB of Should Be Reading. Anyone can play along! Open to a random page of your current read  and share a teaser sentence from somewhere on that page. BE CAREFUL NOT TO INCLUDE SPOILERS! Share the title & author, too, so that other TT participants can add the book to their TBR Lists if they like your teaser.
Here's my teaser from page 38:


Dominique always liked that first moment when he stepped into the street, carrying the scent of cacao with him so strongly that people turned to look at him, trying to catch his flavor.

Yum, why didn't I marry a man who makes chocolate?

This is a real chocolate plot. She eats it. He makes it. They're in Paris. I'm like you. What more could you ask for?

Enjoy...and thanks for visiting my blog.

I've had chocolate on the brain today. There's a forbidden sea salt, dark chocolate and caramel bark, still in my shopping bag. I visit your blog and fall for the wall paper and new chocolate color then I read your current post and it's about chocolate.

This one sounds so good! I'm off to see if I can get my hands on a copy.
Here's my Teaser Tuesday
-Kimberly @ Turning the Pages

makes me want to go buy some sea salt and chocolate bars...hmmm, I'd be hungry reading this book.

Here's mine (YA Fiction):

Romance, chocolate, and Paris -- what NOT to like about this book! Sounds like a winner to me.
My Teaser is from SNOW FENCE ROAD.

Now anything with chocolate has got to be a winner for me :)
My post is here

Yes, I see what you mean. I'd keep reading.

I was hooked at chocolate. Enjoy.

What an intro!! I like that teaser too!! I would definitely pick it up....

I don't know if I'll read the book but I am going to buy some chocolate.