This story starts last Saturday, with a trip to the wine tasting room here in Mireval.
We saw the signs as we drove in and knew that the winery sold muscat, a specialty of the region. It's a very sweet white wine that is used as an aperitif here.
We visited the Domaine La Capelle on Saturday and tasted the 2015 bottle of muscat. 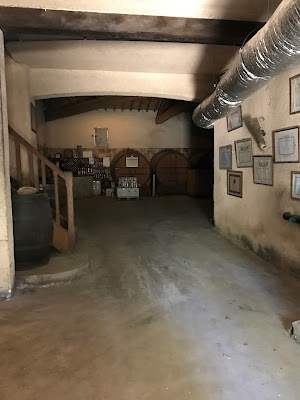 Then, the tiny French woman who spoke no English, gave us a sip of the 1995 bottle of this thick golden liquid.
To me, it was a  bit strong, almost musty, but to Earl, it set off something in his taste buds.
We didn't buy it that day, but Earl continued to dream of it.
She told us the bottle was 58 Euros. That seems like a lot, but really, not that much more than gel manicure. 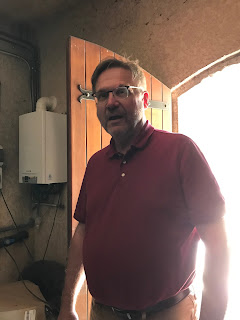 Yesterday, it rained, and I had gone for an early run in the rain along country roads that seemed a little sketchy.
After I got back to the room, the muscle pain along my right shoulder blade had returned, kind of like a stiff neck where you turn using your whole body rather than turning your neck and shoulders. I was also having twinges of pain in my throat and left ear. I decided it was a good day to relax.
So the final full day here, we stayed in the room catching up on some work that I needed to do while Earl worked on his novel.
In the middle of the afternoon, he decided to get his special bottle of wine.
The vintner was within walking distance, so he pulled on his raincoat and headed out.
"You're sure you can do it alone?" I asked. I didn't really want to go with him, but since I spoke French, I might have been helpful.
He waved me off, getting more secure in his ability to communicate with French people. He'd been out to buy breakfast each morning and even began stopping at the bar across the street to bring me coffee -- coffee to go in France is quite a rarity.
He asked whether I thought she would take credit cards since we hadn't replenished the cash we brought over. I figured she would since so few businesses operate in cash only.
I continued to grade papers and respond to email until a loud bang, followed by "Shit!" rang from the hallway.
I thought Earl had tripped coming up the stairs.
We are on the second floor, which the French call the premiere etage, the first floor. They count the ground floor and then the first floor. As I got up to open the door, he came in holding his head.
He had run into the closed door at the end of the hall with full force, banging with the bone just over his eyebrow. It started to bleed and a knot began to form.
"What happened?" I asked.
"I didn't turn the hall light on and I ran into the door," he said.
That's something else to know about France. The hallways are always long and dark with no outside light coming in. There are usually lights at the beginning or ends of hallways, but the lights are on a time. You press it then move as quickly as possible to your door or the stairs.
In this B&B, there was a door on the first floor (ground floor) which gave some light. The light for the upstairs hallway is at the bottom of the stairs. He didn't think he needed the hallway light so he came up in the dark.
"Sit down," I insisted.
"No, the lady is waiting. I have to go get some cash."
I wanted him to press a tissue against his wound to staunch the blood and then hold something cold against it to prevent a large bump.
He requested a bandage, which I placed over his eyebrow.
Then I looked up whether there were banks in this tiny town. The post office has an ATM. So he headed off again.
When I texted Grace, she was appalled that I let him go out alone after a bump to the head, but he couldn't stand the thought of the old French lady waiting for him to return with his cash.
And, in spite of the difficulties, he returned with his special bottle of muscat in hand. 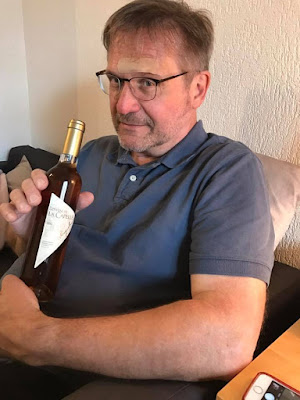 Ha! It's definitely the smallest things that cause us such issues. He looks happy and vendicated.

Oh dear!
As I read I thought he had fallen ON the bottle of wine, which would have caused more serious injury.
Do not hesitate to go to a doctor. The price of doctor's visit has risen to €24. That is the full price, not a co-pay.
As for your neck, I have somebody in Carcassonne who might do you good. An osteopathe, but rather than cracking he mostly does pulling and stretching to put things back in the right place.
And always hit the minuterie!

Mystica, He's fine now. No serious injury!
Just Me, Yes, he's so pleased with buying the wine.
Francetaste, I thought the same that if he had broken the wine it might have been a true tragedy. As my back pain continues, I might take you up on that osteopathe. I'll leave a message on your blog and maybe you can send me an email at paulita dot kincer at gmail dot com.

Oh no, that's just no fun -- especially on the last day in a spot. But I'm glad he's all right now and that you were able to get the wine -- I'm sure that did great things in helping the healing, at least emotionally!