On Tuesday, we made plans to have lunch at the home of a French couple we had never met.
Their granddaughter is a reporter at the newspaper with Earl. When she heard we were coming to France near Montpellier, she insisted we visit them.
Earl and Guy (the grandfather) shared emails and we planned to visit them on Tuesday.
We spent the morning exploring Montpellier 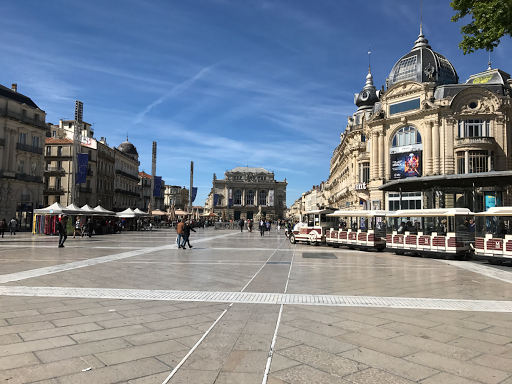 and purchased a sack of roses as a thank you gift, but we needn't have bothered because Monique (the grandmother) has beautiful flowers surrounding her home.
We knew they spoke some English because they living in the U.S. for a few years. He worked for IBM.
They're in their 80s now with a beautiful home in a bedroom community about 20 minutes outside Montpellier. 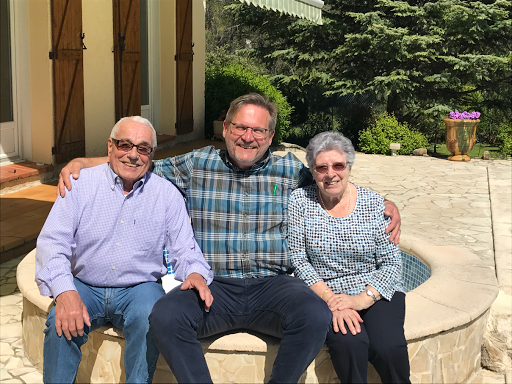 We took the back roads until we came to the big gate that leads to their driveway. Earl pushed the button and the gates slowly opened so we could drive inside.
Guy came from one direction to energetically shake Earl's hand while Monique came from another to greet me with cheek kisses.
In a mixture of French and English, we spent four hours over a meal.
We began on the terrace, overlooking the pool with the amuse-bouche or amuse-guele and apertifs. Guy supposed that amuse-guele was not quite polite, and guele can be translated to maw or gob, but mostly it just means some tidbits before the meal. Don't get it considered with the entrees, which are the first course of the meal. There were green olives, little tomatoes with the stems still attached, tiny savory crackers, pieces of salami folded like flowers, and cashews,
So what would I have to drink? Guy offered pastis, which is a typical Provencal drink, and one that I hadn't drunk yet this trip, so I said yes. He continued to suggest other drinks though and eventually convinced Earl to have some bourbon. Monique brought out one huge decanter of bourbon and one bottle of Chivas. Guy poured a good three fingers of pastis into my tall thin  glass and added water so the mixture went cloudy. Pastis tastes like licorice. It made me tipsy right away, which was excellent for my French speaking skills. 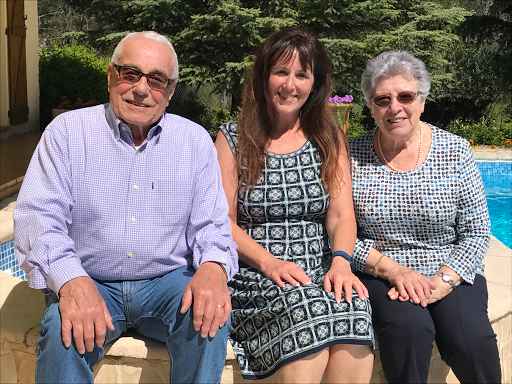 I didn't take pictures of the meal, because it's rude to pull out a cell phone in the middle of a meal, so we talked and ate and laughed a lot.
Monique was 12 when World War II ended. She said she didn't have it too bad because her father was a butcher. They lived in a small village that wasn't greatly affected. They had sufficient food throughout the war.
But Guy lived outside Paris and was 15 when the was ended. He does not like to talk about it because it is too painful.
We explained that Earl's father fought in World War II but in the Pacific rather than Europe.
After a good hour of talking and drinking, we moved inside to the dining room.
We began the meal with a broccoli tart. Monique explained that she had asked her granddaughter over and over what kind of food we liked but she never responded. Young people! I agreed. They aren't likely to respond to emails.
So the tart had an egg base and the pastry shell had a wavy crust. Delicious.
The men and Monique drank wine with this course. White wine.
I abstained since I needed to drive back to the hotel eventually and I already felt light-headed from the pastis.
The next course, the main course, or the plat, was a veal stew. Veal, carrots, mushrooms and a delicious sauce of cream and mustard. I would never have guessed there was cream in there.
Just when I thought for sure I would burst from the delicious food, Monique brought out a cheese plate with five kinds of cheese.
I asked them which cheeses I should try and they said all of them, so I took a small piece of each cheese, eating them from mildest to strongest.
The goat cheese and the roquefort were the strongest, the brie was in the middle.
I always prefer when French people start the slicing of the cheese so I can tell which direction I should cut it, but I had to begin. They didn't say a word, however, when Earl began to cut it a certain way, Guy jumped in to criticize him.
Then they both laughed. Guy realized quickly that the best way to get at Earl was through joking.
Of course, eating all that cheese required bread as well, and I took a bit of red wine to wash everything down.
Finally, Monique brought in dessert. I thought it was one dessert, but she made three different ones. A brioche, a slightly sweet bread. A creme that was whipped and put in the oven, similar to flan, and finally, pears cooked in sugar and wine. Those were heavenly.
After the meal, we called their granddaughter in the U.S. so they could talk to her. We had to try several times
Finally, we took a tour of the garden, beginning with the pool and the hot tub, then around to the various flowers and trees. Guy has a workshop and a literal cave, not just a man cave, where he keeps his wine.
They say that they will sell their house soon and move to someplace smaller.
Guy has anxiety around crowds now, so they limit their travel and their socializing.
As we finished our visit, Monique kissed me on the cheeks three times. Then I moved toward Guy and he pushed Earl out of the way. "I am going to kiss your wife now," he said in his heavy French accent.
They were both a delight and we'd love to see them again.
We feel bad that they are so isolated. Their only son lives in the U.S. and their two granddaughters live there as well. I suppose, it serves them right for giving their child a love of travel when they took him to the U.S. to live.
Now one of their granddaughters will get married next year and they don't plan to make the trip because it is too hard.
What an adorable couple they are. When we move here, we will consult them before we buy a house, and we'll probably make sure that we aren't more than a couple of hours away so we can visit them, as well.
at May 11, 2017

They sound delightful and look adorable!
You seem to be settling in well!

Sounds like a delightful day - truly French meal with especially lovely hosts. They surely set the bar very high for having some one over for lunch/dinner. Again probably truly French way.

They sound adorable and the whole afternoon/evening sound like one to remember. I'm so pleased you will keep in touch and try to visit them when you settle. It think it probably is difficult to be so far from people, from family. They sound like they could use some adopted grands!

How wonderful for you all , and wow what a meal. Truly spoilt . a very delightful day. x