I never know whether I should post about the things that happened the past few days or jump to today. But if I start posting about the past, then I never seem to catch up.
Traveling here was exhausting. I took melatonin on the plane but never managed to fall asleep, instead just dozing a few times. Maybe I'm getting too old to fly overseas and skip a night's sleep. Someday, I hope to relay the entire story -- two planes, two trains and one automobile, which the rental people seemed very reluctant to give us. "It is a new car," the woman said.
"Look, we aren't planning to wreck it," I wanted to say
But things improved rapidly after we got to the BnB, I took a shower and we went out to dinner.
The town where we are staying is fairly small. It has a boulangerie, a small market that sells everything, a pharmacie and a couple of wine makers. But it doesn't have a legitimate restaurant. Instead, it has a restaurant rapide, pizza place.
The woman in the market said it had good food, so we walked there.
We started with a glass of moscat, which is made locally. It is very sweet and tasted delicious.
The menu offered goat cheese pizza with black olives, so that is what I ordered., along with a $14 bottle of red wine and a salad. About halfway through that bottle of wine, things started to feel much better. 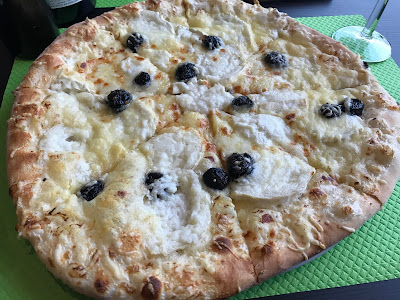 By 9:30, we returned to the room and I fell asleep by 10.
I started my morning with a run. It's strange to run in a place that is unfamiliar. I needed to make sure I didn't get lost. So I ran through town and turned right. That took me out into the country a bit. I heard a rooster crowing and in the distance a ridge of mountain jutted up. 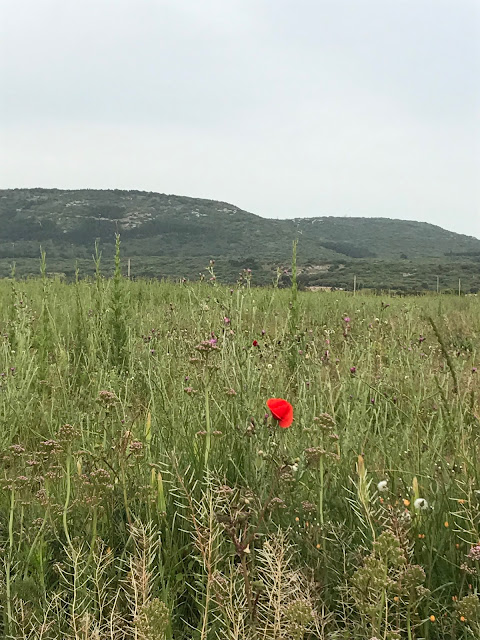 In Ohio, it's very flat so I'm not used to real mountains, only fake ones in the clouds that look like mountains.
I only went about three miles so we could go off on our daily jaunt. Our goal is to visit cities with markets in hopes of choosing an area we want to move. Not many cities have markets on Friday mornings, but Séte, a city on the Mediterranean said it had a small market, so we headed there. It's just half an hour by car, and although I nearly got us killed when we first started driving there, I got the hang of it and didn't put a scratch on the new rental car.
The market at Place de Stalingrad took up nearly two blocks. 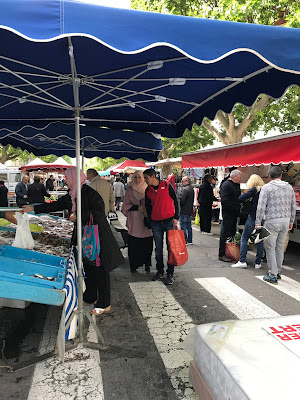 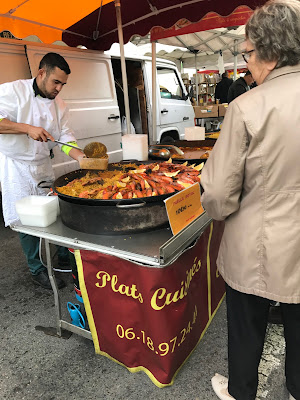 It had every kind of fruit or vegetable we would want to buy. The cherries seemed quite popular. And it had lots of prepared foods too, like this paella. The man had several giant pans of food.

We enjoyed the sunshine and walked toward the Mediterranean. The town is quite industrial with a lot of fishing boats and other industries along the waterfront. The canals seemed to be the places that people enjoyed the water.
Some of the architecture reminded me of Nice, 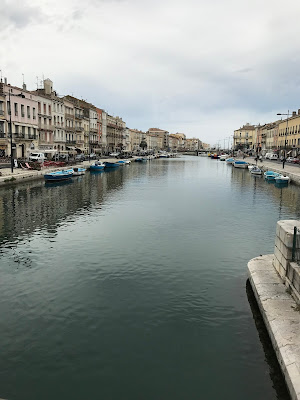 while others reminded me of typical French style. 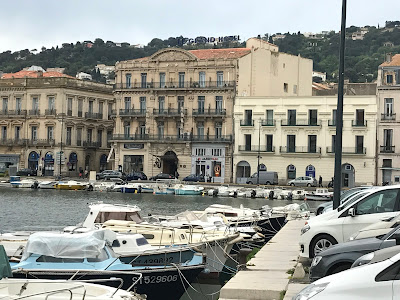 The restaurant where we ate lunch had mediocre food, which is always a surprise in France, but we have made up for it in other ways, with lots of other foods. 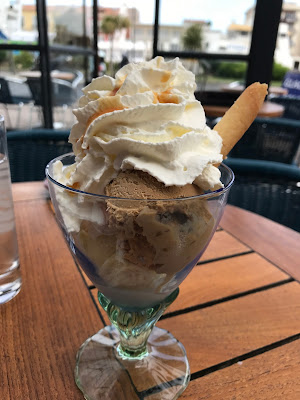 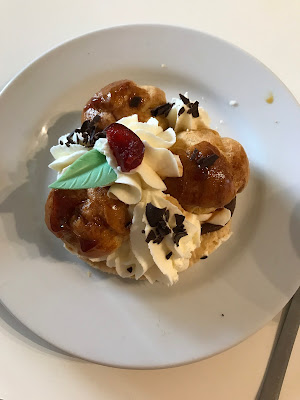 Thanks for visiting. I'll try to get a post written tomorrow before we run over to Aix en Provence to visit our friend Delana.
at May 05, 2017

I do hope you find a place you like soon.

So you are here at last, is this just a holiday or is this the real move over, sorry I havent commented recently but not been good and also lots going on, have a really good time x

Aix en Provence is where Emile Zola was born (I only know this cause I just reviewed one his books set in a fictional based on Aix).

How fun to finally arrive! I'm so glad you have landed and now are looking for your forever home. Keep these wonderful posts coming!

I started reading your blog from Delanas blogroll. Funny that your going to see her shortly.I always wondered if she was still In France.
Hope you are successful in finding the right spot. Although pretty much any spot in France has to have a bit of paradise in it.
Cheers, Shelagh

We bought a house in France in a village and area that is not well known, especially to foreign visitors and English is rarely heard or spoken. And we couldn't be happier! Each region of France has its own uniqueness and the French anywhere are warm and friendly, albeit reserved until they get to know you. Although our village has only 1800 inhabitants, it has 4 schools, 3 doctors, 3 dentists, 2 vets, 2 pharmacies, 2 physiotherapy practices, 3 boulangeries and a small weekly produce market. It takes time to get the feel of a village and to "know the ropes" so don't be too hasty to make a decision about where you'll put down your French roots. Bonne Chance. Amicalement, Elizabeth

Mystica, Thanks for the well wishes.
Roz, I hope everything is okay. I always enjoy reading about your quirky French life. You're such an inspiration.
Brona Joy, I bet there is more about Emile Zola in Aix. I should look for it next time.
Jeannie, Thanks. Funny how there seems so little time to blog when you're basically visiting and eating and traveling.
Shelagh, So nice to meet you. I met Delana through her blog, too. I included a picture of us together in my next post as proof that she is doing well and happily still living in Aix en Provence eight years later.
Elizabeth, Some good advice. We won't settle too quickly.

Oh how fabulous. Such wonderful adventures and decisions you have ahead. The area looks beautiful. I've never made it to the south of France, mainly because I can never tear myself away from Paris. That pizza looked so great. I can't wait to hear and see more.

How fun. You will find the perfect place. Enjoy.