We continue our meandering vacation, driving to markets, hiking, eating.
Our Airbnb host is rather appalled at our lack of plans to visit touristy sights. She suggested we visit a famous church/town near here called Rennes-le-chateau.
Her husband even brought by a book that he had bought in French but ended up unable to read -- they're Australian.
The book is about a priest who was assigned to Rennes-le-chateau in the late 1800s. When he got there, the church was a mess, falling apart, and he had no money to fix it. He received a donation from a countess and began to make repairs. Suddenly, he was buying land and having stone masons build gardens and a tour.
The rumor is that he found treasure under the church. Other people have tried to find it, but the real treasure now that they earn is in the tourists coming to visit. I haven't checked out this website, but it claims to have lots of links if you're interested in the mystery.
Apparently, some of these stories were used in the DaVinci Code by Dan Brown.

Whether there's a hidden treasure from the Visigoths, Celts, Romans or the Knight Templars, the grounds look pretty amazing now. 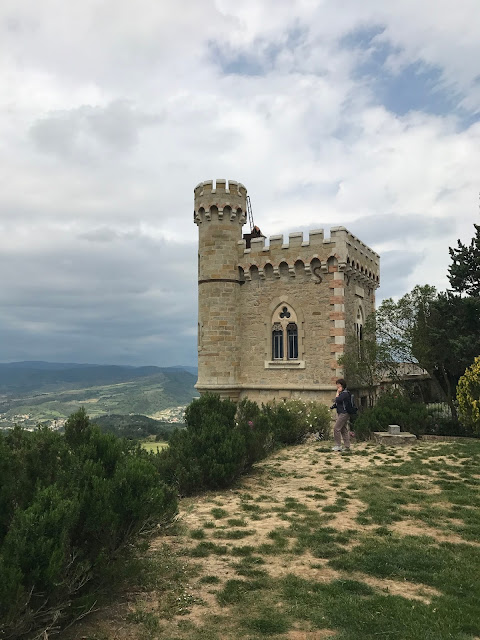 This is a tower that the priest built and used as a library. It's a little sketchy that he built all these opulent buildings for himself, in my opinion. Of course, the church wasn't using money that judiciously in the past anyway, so maybe it didn't matter that he didn't share. 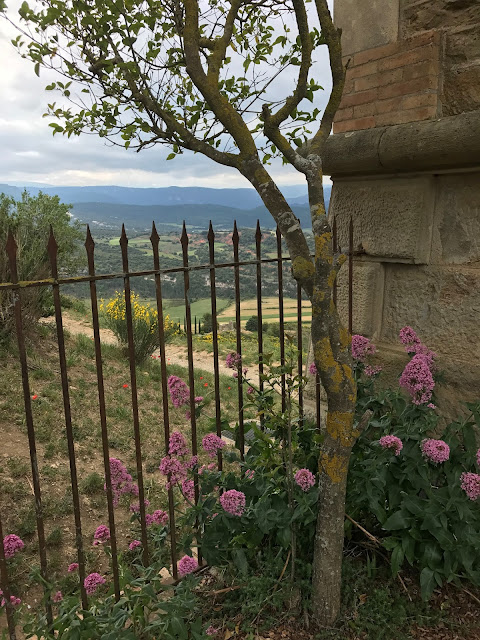 Here's a view of the countryside. 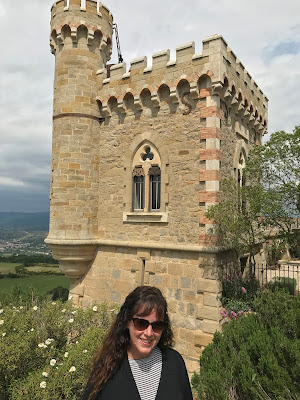 Me, in front of the tower. 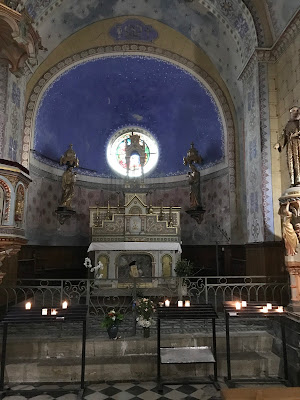 Here's the inside of the church. I love when churches use that cobalt blue for the sky with stars painted on. The church has a bizarre statue of the devil stooped over with a basin for holy water on his shoulders. Just last month, a Muslim woman is charged with vandalizing it -- she broke the head off. 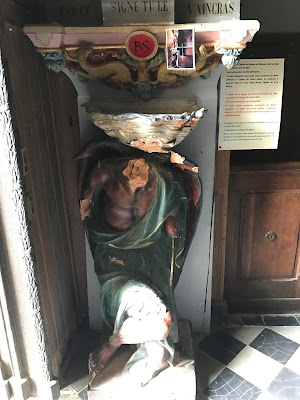 Here's how it looked when we saw it Thursday. 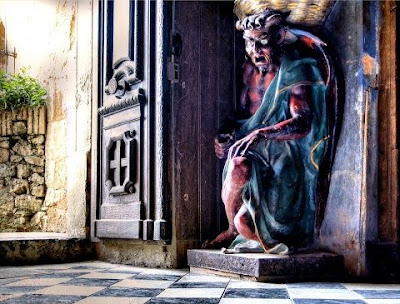 Here's how it looked in a picture about the news story, before it was vandalized.
Had you heard about this place? I hadn't.
We're off to Paris to spend a few days before heading back home. Thanks for reading and commenting.

I've just caught up on your blogs - and your French trip to date. Initially, I thought that this was the big move, but if I've understood correctly it was a holiday/planning trip? In any case, it seems like you now have a wealth of information to add to your decision making.

There is always something new in France waiting to be discovered "just around the corner". Like "Church Mystery" I too thought this was the big move! Bon week-end

I love those unheard of snippets about places. This place has big snippets. Fascinating.

Are you close to making a decision on where to move? I love your baguette rating system ��

Yes, Rennes-le-Château is quite a big deal (and probably a big scam).
Plus, it's gorgeous around there. We stumbled onto a wonderful resto in the town of Rennes-les-Bains last year during Ferme en Ferme.
There are several Cathar castles nearby: Puivert, Puilaurens and Arques. A little farther are Peyrepertuse and Quéribus, which are pretty awesome.

Catherine, This trip is kind of planning visit. My husband plans to retire at the end of the year and we hope to make the move then.
Elizabeth, Yes, we are always finding new historical stories in a place like France with its rich history.
Mystica, We never would have known if not for our "landlady" who pointed it out.
Lynn, We've found a number of places where we could live. How will we choose? Lots of places got 4 baguettes, but which one will get the coveted 5 baguettes?
Francetaste, I guess that priest did find treasure, because the town and the church are sure raking it in now. They make a ton of money based on that story -- whether it's true or not.

I've never heard of this spot -- it's pretty beautiful, though a shame about the vandalizing. (The colors actually look kind of neat but it just seems wrong in the circumstance!) Beautiful countryside, too.

I'll be curious as to if you have found your new home. It seems like you've visited a lot of wonderful ones.