Worst Dishwasher in the World 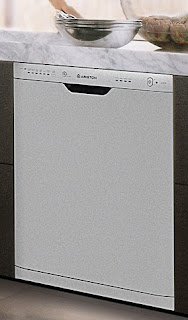 We have the absolute worst dishwasher in the world. And I'm not talking about myself. When we bought this house with its totally redone kitchen, granite countertops, cabinets with the roll out shelves and all stainless steel appliances, we thought our kitchen worries were over.
I remember my friends joining me that first day in the kitchen. We pulled open the dishwasher and looked at the wide expanse of the top and bottom racks.
"That's great," Laura had gushed. Without specific places for glasses, bowls or plates, we could stack things wherever we pleased. Until tall glasses began to fall over and bowls tipped on the wrong side like turtles on their backs. Not so great, I admitted to Laura after a few weeks.
Then we realized the dishwasher was not doing a good job at actually cleaning the dishes. I mean, that is its purpose.
"We're probably filling it too full," Earl suggested. So we put fewer dishes in it.
It has no heating element, so the dishes are always wet when we open it.
"Just trying to save energy for us," I'd think as I pulled out a dish towel to dry the sometimes clean dishes before putting them away.
When it still wasn't cleaning well, Earl read the directions carefully.
"Here's the problem. It needs dishwasher salt."
Of course. Why didn't I think of that? Because who knew dishwashers needed salt?
"Well, it's Italian made," he explained, as if that told me something about why my sucky dishwasher didn't actually wash dishes.
He ordered special salt for the dishwahser. Still dishes with films or apparently untouched by the water sprays.
The soap holder no longer opened so we'd just toss the detergent in there. We tried different detergents with extra rinses and extra cleaners. To no avail.
Earl continued to work on improvements. He'd clean the trap, wondering how so much food ended up in there when we were practically hand washing the dishes before we put them in the dishwasher. He started cleaning out the inside of the dishwasher weekly.
I kept a bottle of bleach and water and would spray down the inside, seeing the mildew that was forming inside the dishwasher? What kind of dishwasher gets moldy on the inside?
I started spraying the bleach water into the spray arms then wiping out the mildew that seemed to have gathered there.
Earl took the bottom rack to the backyard and used a hose to dislodge the thick black mildew that had formed around the underside of the wheels. I sprayed more bleach water and ran the dishwasher empty.
Today when I got home, he told me that he had dislodged the two spray arms and taken them out back to hose them down.
He described what he found as "ribbons of mildew."
That makes me gag. We've been eating and drinking off dishes that were daily being doused with mildew-laden water.
To all my friends and family who have ever eaten at my house, I apologize for the potential poisoning you received. I can only hope the mold changed to penicillin in your body and warn you never -- never, never, ever -- to buy a dishwasher from the Italian company Ariston.
Some of you may be saying that I obviously need to buy a new dishwasher. And I would agree with you, if I didn't have a small $18,000 college bill waiting for me in August.
So, I guess it's back to the olden days and handwashing my dishes.
at May 21, 2010

Well, bummer. Usually Italian appliances are good. Spanish ones are really horrible. I have to add salt to my dishwasher here. My glasses never look good no matter what sort of product I use.

Thanks for you good article. I have to buy the new one at Dish Washer store