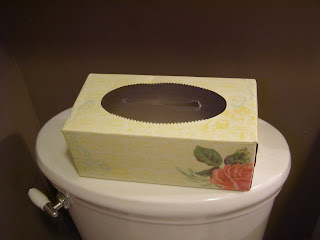 Of course, our expectations were low. We were coming home to a house with three teenagers who had been, for the most part, home alone for more than a week. Their aunt, 10 minutes away, was ultimately responsible for them and she did more than her share of calling and calming and checking for broken bones.
The kids though opted to stay home rather than sleeping at her house everynight.
All things considered, everyone was alive and healthy. The house smelled slightly musty, with the tinge of molded bread coming from the cabinets and overripe fruit emanating from the trash can.
The living room was picked up. One side of the sink was free of dishes. Truthfully, they did a splendid job of surviving.
Surviving is so different from thriving though, isn't it?
The little things were missing. For instance, the kleenex box on the back of the toilet was empty. No one had thought to recycle it, much less replace it with a clean one. The same hand towel that I put out before we left lay slumped on the bathroom counter. The shower held no soap, but a bottle of shower gel looked like it had seen some use.
The laundry had piled up and the dishwasher was rarely used because I'd set out a stack of paper plates and cups. I figured it was better than expecting them to do dishes everyday.
Grace had stayed home sick one day with a cold and Spencer had been sent home bloody one day after he fell playing basketball at lunch. The fights between the kids were minimal and the police were never called.
Overall, a success I think. If they're a little grumpy, a little clingy now, well, that's the price I pay for my nine glorious days in France.
at May 06, 2010

My son had a wild party once while we were out of town. He really thought we wouldn't know. Kids.

My kids would all tell on each other. That kind of keeps them on the straight and narrow. I knew they wouldn't have a party, just worried they might hurt each other!