Motherhood is a Tightrope 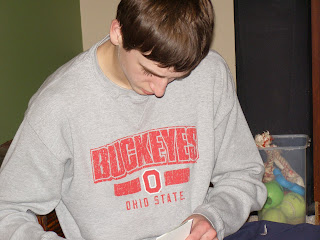 Being a mom means walking a careful tightrope. I need to give my kids enough room to try new things and fail or succeed, but keep them alive and healthy. It's tricky sometimes.
Last week I wrote about my dilemma as to whether I should allow Spencer and some other 16-year-olds to camp alone in the country. I opted to keep him home. That's why I was reluctant to say no again on Sunday when he and three other guys decided to go swimming at the quarry.
My kids had never been to the quarry since we moved here three years ago. The old marble quarry is surrounded by townhouses and apartments now. I don't know if signs forbid swimming. I do know there are supposed to be freshwater jellyfish there.
Spencer explained that there is a sandy beach and that they would swim around beneath the rocks before they did any jumping or diving in to make sure it was clear of underwater rocks.
Spencer is also a lifeguard, so, even though I was reluctant, I let him go. I have to admit that I called his phone a few times before he walked in the door in his swim trunks, no shirt and flip flops. He was home safely with stories of swimming out to rocks far into the quarry. He'd taken the risk and he was home. I wiped the sweat from my brow.
Now, two nights later, we're flipping between Glee and the NBA playoffs when my editor husband texts me. A teenager from a neighboring suburb has died in the quarry tonight. He is a football player and was swimming with other football players.
I don't know the details. I don't know if they were rough housing or trying to see who could try to reach the bottom of the quarry. I don't know if they were diving off cliffs and hit a rock. I don't know if he was a weak swimmer who couldn't make it back.
I do know that it feels too close, like one of my feet slipped from the tightrope and I had to reel my arms like windmills to regain my balance, checking to see that they were all safe. And I can't imagine how that other mother feels. It's so hard to let them take risks when anything could happen when they walk out the door.
at May 25, 2010

That's a scary feeling-I know. I think you should always trust your instincts which were right in this case-you had doubts.

what we've always heard was the quarries are private property if you live on the quarry you're allowed to fish there but there is never any swimming allowed.

Ironically I drove by the quarries the other day and I was wondering why they don't let people use them. Then i saw the news scrolling through Glee last night, very sad.

I've had similar (never so extreme) situations where I didn't listen to my instincts with the kids and while they got through the situations fine my instincts were correct. I guess we just need to learn from the lapses.

Beautifully written Paulita.
You capsulized the feelings and fears so well.
My heart, with prayers, goes out to the family who lost their son.
Please give your kids an extra hug for me tonight. <3