Travel Time and the End of a Love Afair

We made things harder on our travel schedule by going to Nantes to visit friends. Of course, we loved seeing them and spending time with them, but the trip home was brutal.
We didn't sleep well the night before, checking the alarm clock to make sure we caught the 7:30 train.
We took the TGV to Paris Montparnasse. That's a 2 hour, 15 minute trip. Once there, we found a bus that goes directly to Charles de Gaulle airport, known as Roissy, I don't know why.
The bus makes one more stop at the Gare Lyon before heading to the airport and we were cramped into those tiny seats for more than an hour. Why didn't we take the Metro, we wondered after paying 33 Euro for the long bus ride.
The metro stops farther away from the terminals and we'd have to walk, but that might have been preferable to sitting on the bus for all that time. Poor Earl, his knees jammed against the seat in front of him again.
Once we checked our baggage and waited in line through security, we walked past shops searching for the correct gate.
"Let's get through, put our stuff down and go back to get coffee," I suggested. Earl agreed. We hadn't had breakfast, still stuffed from our meal the night before of white asparagus in vinaigrette, scallops in a cream fresh sauce, four kinds of cheese and a bakery gateau called Trinidad with mango between the chocolate layers.
We saw our gate at the end of the terminal and found another security line for those passengers going to the U.S. We didn't realize that once checked through the special isolation security, we weren't allowed to leave again.
I asked the security guard if we couldn't go back into the terminal to get coffee.
"There was plenty of time for that," she said in French, but this time I understood her.
I felt like a chastised child. We had hurried to the gate, two hours before the flight, and now we would sit and suffer.
We had a water bottle, a pack of cookies and some edible gifts for the kids. We were tempted to dig into those. I also had no book to read. I had planned to buy one in the terminal since I'd read the two we brought along. 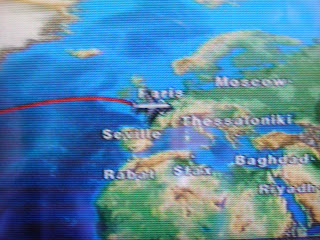 I did have a Sudoku book and my computer. I couldn't get on the internet because it required a special password (Detroit's airport didn't, Paris' did). I played some lame games that came on my computer while waiting and waiting and waiting.
And then the flight home. It's nine hours from Paris to Detroit. Our flight was scheduled to leave Paris at 1:30 (Paris time) and get to Detroit at 4:30 (Detroit time). It's all day time and we didn't sleep. We waited on the tarmac for an hour so left at 2:30 and arrived at 5:30.
Air France has little television screens in the seat back so each passenger can choose his/her viewing pleasure. This helps to pass the time, but nine hours of television? Even watching the screen follow the flight as it goes over the UK and Iceland can seem exciting after five hours or so. 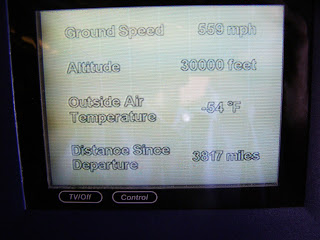 We both felt like we'd fallen out of love with Air France on this voyage. Before, we were always willing to pay a little more to travel Air France. Traveling on Air France versus, say, Northwestern was like having dinner in a restaurant in Paris versus a dinner in Columbus. There was a little more attention to detail. The food definitely made a difference. The seats seemed a little roomier. On both flights this time, it seemed like a cattle call. Boarding was just "Okay everyone with a ticket can now board." Are you kidding me?
So next time, and I'm sure there will be a next time, we'll choose the best deal, unless we can get an upgrade with extra leg room for Earl.
We had been travelling 22 hours when we finally arrived home and surprisingly found all three kids home, for a little while anyway.
at May 05, 2010

I feel your pain-just no way you can enjoy getting on that plane, not to mention all of the stuff before hand. I still think Air France beats American Airlines. The best ever=Singapour Airlines-but they don't do Paris/NYC

Oh, the down side of traveling but in the long run, it is worth it because we somehow forget and do it again. Some flights are better than others for sure! I personally like American. Air France is lovely but now a days, for the most part, an airline is an airline. Although, I have heard that Singapore is to die for! Glad you made it home safely. I have to tell you that since you have been gone, the weather has turned cold again and windy. I had to pull my winter coat out again. You must come back soon and bring the warm weather back. You had ideal weather!!!! xo,Gina