I was making school lunches the other morning -- a job I loathe even though I've only done it for three years -- when I suddenly remembered that next year I'd only have to pack two lunches. Grace would be gone to college so I'd only pack for the boys. I perked up at the thought of buying one box of drinks that lasted the whole week. Three kids, five days a week -- that's 15 drinks. Whereas two kids... well, you do the math.
Then this week Grace is gone as a counselor at 5th grade camp. I'm packing two lunches in the morning for the boys, but I miss Grace. And that's when I realized that with packing lunches and so many other things, I'm anxious to get on to the next step. I want to put this stage behind me, put a big check mark next to it and move on. 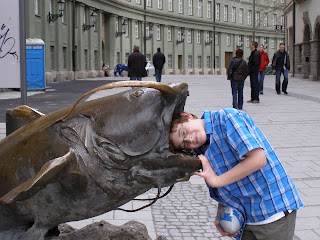 When the kids were little we had boxes and boxes of hand-me-down clothes. We were lucky to have so many clothes for the kids, but I hated all the clutter from the boxes. The boys clothes came from my brothers' sons and the girl clothes came from Earl's sisters' daughters. I separated them according to size and when the youngest reached that size, I could throw out the box crowding the attic. I couldn't wait to get rid of all those big boxes. It wasn't until later that I realized how I was rushing through the kids' childhoods because I wanted to get rid of boxes of hand-me-downs.
I wonder what else I am sprinting through, not taking the time to enjoy, anxious to clean up and finish?
Because, I have to tell you that this week, with Grace gone and only fixing two lunches, I'm not really using that extra time wisely. It's not like I take the time I saved and work on the the great American novel.
Another game of gem drop anybody?
at May 12, 2010

This warms my heart.

But you have described the phenomenon so well, at least one sort of way we don't live in the moment.

Warning moving slightly off target. This week has been a royal pain at work and I'm thinking how do I not live for the weekend or the very moment that I am not in pain. Or how would I process these same events would I know that next week my entire life could change?

Thanks for a moment or two in your life.

There is always something, even in bad moments, that is good. You just have to try and find it. Look out the window, look at a picture, email or call a friend. Just find one small thing that is good.

Thanks Stephanie.
Thinking of you today
Sending good thoughts.

I agree that it's normal to look forward to things (like weekends) and count the minutes until some things are finished (like work), but to do that with the things we should be embracing, that's the problem. Hope work gets less painful and I know you'll find time for a walk. Now that's worth doing!

I Rather Not said...

Of course, you're right.

I read somewhere, sometime about really embracing and enjoying everything you do. It really comes down to your attitude. This author was talking about the simple act of washing dishes and making dinner. Dinner is an easy one to think about (much like making school lunches)you're creating a meal for your fmaily and if you do that with love and good intentions than that will go through to the food. As for the dishes if your take the time to really enjoy the warm suddsy water and the process instead of thinking its just another chore to finish it can become a moment of peace and tranquility.

This post was a good reminder to appreciate all the moments that can easily be pushed aside and thought of as just another thing to check off on the daily list of living life.

Sheila, Some good points, but I'd rather rush through the dishes and get to a good book. Maybe I'm just "dishest" (that's the word I just made up for prejudiced against dishes), but I wish someone else would do them.