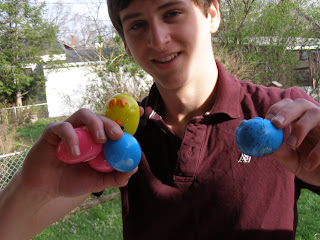 That's what my 16-year-old son is calling me. He thinks it's ridiculous that I won't let him go along with five of his buddies for a weekend at a friend's trailer in the Hocking Hills.
Hocking Hills is a beautiful area about an hour and a half from here, where the Appalachian Mountains think about starting. The hills start to roll and they're covered with an expanse of forests. We've gone there many times as a family.
His friend Riley's family owns a trailer somewhere in the Hocking Hills, and these 16-year-olds, who are becoming newly independent, think it would be "epic" to go down there for the weekend. They'd build a campfire and roast hot dogs. They'd cut their own wood with an ax. What could possibly go wrong?
Let's start with the drive down there, I suggest. Who plans to drive you all? He lists two friends who have their license and access to a car. Two 16 year old boys driving a carful of friends onto those curvy, country roads. Disaster right there. Aside from the fact that Ohio has a law that 16-year-olds are only allowed to drive one other person in the car, I would not trust a 16-year-old to drive that far away.
Then there is the group of boys sitting around a campfire with access to knives and axes. Can't you just picture the way they would begin to dare each other to do things?
I can't even come up with the ludicrous kinds of games they would invent after watching weeks of "Deadliest Warrior" -- whether they'd be playing an innocent game of William Tell and shooting apples off each other's heads or trying hatchet throwing games.
Sixteen-year-old boys in a big group don't always make the best decisions. They also aren't good at resisting the suggestions of the rest of the group.
What happens when one of them decides they need to go on a beer run? Has the driver already been drinking when they pile into the car in the dark on those twisty roads?
"Mom, would probably wouldn't even drink beer," Spence said to me. Then realized what he had said.
Do they leave behind the campfire they built and consequently start a forest fire? See, they could do more than just hurt each other.
"No way," I said.
"But you said I could," he lied.
"I said you could go if Riley's dad went and drove," I corrected him.
I can't believe the other boys' parents are okay with this. Some of the boys' parents I don't know very well, so maybe they are letting their sons go. Or maybe this is just boy talk about what they'd like to do and none of the parents are okay with it.
I suppose in two years he'll be going off to college and I won't be able to control who he drives off into the mountains with. But maybe something magical happens in those two years and his decisions become much more measured.
What do you think? Am I being overprotective or should I stick to my decision?
at May 18, 2010

No way. Do not let him go without adult supervision. If other parents are saying "yes" they are making a big mistake.

the driving would be the big issue for me. Although the pack mentality of a group of 16yo boys is not to be trusted. :)

Daniel did go camping at Alum Creek with a group of friends his senior year of HS. it was 2 boys & 2 girls which probably cut back on some of the daring stunts. Unfortunately, they got rained out after the first day and had to move the camping trip back to my house.

I think the freedom of a camping trip is a lot of fun for teens (i still remember my experience the summer after my junior year and Shauna talks about hers with a group of girlfriends during her senior year) it does seem to be a right of passage. One of my biggest memories is just the fact that I got to do it and how cool my mom was for letting me. so maybe its something he can look forward to when he gets a little older.

Luckily once they go away to school the cars are very limited so they really don't get to drive many places.

Teenage boys tend to be dumb sometimes/almost always when they are away from parents, so I don't think you're being overprotective.

So let's say you are being overprotective, what of it? As a parent, I say it's my right to be overprotective, logical, and the term Alyse heard last week at JHS, "old school".
If that's what it takes to sigh in relief at the end of the day and sleep well that night, then that's the answer.
Oh, and on a side note, our kid's brains aren't completely myelinated until they reach about 22yrs old. That's when rational thinking finds a home in their head.

Found your blog when I did a google search "Hocking Hills" a favorite topic of mine. Enjoyed your blog and webpage. Good luck with the books

I'm with you. I guess I was overprotective with my kids too but they just do crazy things when they get the chance.