Tonight, I was watching the replay of The Daily Show with John Oliver. He and his guest were talking about important moments in their lives and the music that played during those moments.
I didn't expect that I would connect with specific songs and turning point moments, but two immediately jumped to mind. 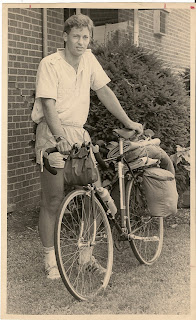 The first was a huge crush I had on a guy from New Zealand. I met Mike when I went to interview him for a story in the local newspaper. Mike was riding his bike across part of the United States, and Ohio didn't get a lot of people from New Zealand at the time.
The sparks flew as soon as I sat down with him. We went on a few dates before it was time for him to move along. I offered him a ride down to Kentucky where I was going to visit my grandmother. We went boating with my cousin and explored the woods near my grandmother's house and swam in the lake. He asked me if there were alligators in the lake and I laughed at him since we were in Kentucky instead of Louisiana.
But I was leaving for grad school and he needed to continue his journey south. He decided to try to catch a ride down south rather than riding his bike. So the afternoon I was returning to Ohio, I dropped him at a truck stop. As I drove away, Phil Collins' song "Against All Odds" came on the radio. "How can I just let you walk away... How can you just walk away from me when all I can do is watch  you leave." I cried as a I drove away.
So that's the first moment that came to mind when I thought of important moments and music. Then I felt bad that I didn't immediately think of my husband, who, obviously turned out to be much more important than this hot guy from New Zealand.
That's when I remembered a Sunday afternoon the spring of 1988. Earl (who would become my husband), Mike and I decided to take my new Mustang convertible to visit a flea market. Afterward, we drove around in the hot Florida sunshine and heard, for the first time, the Bobby McFerrin song "Don't Worry, Be Happy."
Can you imagine how that felt, riding around with the man I would marry, feeling the sun on our skin, the wind in our hair and singing at the top of our lungs -- "Don't Worry, Be Happy"?
How bout you? Can you remember music playing at special moments in your life?

Oh my what a wonderful story PK.