Seduction by M.J. Rose and a Giveaway 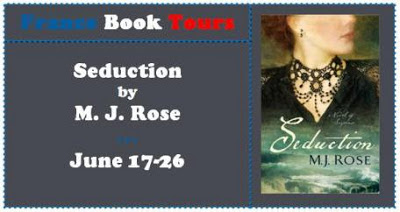 When I first began the novel Seduction by M.J. Rose, I was confused. It started with a journal written by Victor Hugo in Jersey, Channel Islands in 1855 and recalled how he had learned of his daughter's drowning death 12 years before. The next section jumped to Upstate Connecticut present day and a character named Jac L'Etoile who had been dealing with "hallucinations" of past life regressions since she was a teenager. Jac, short for Jacinthe, the French word for hyacinthe, worked as a producer of a reality TV show that debunked myths in cultures around the world.
I couldn't begin to see how these stories related, and I feared that I wouldn't care about the hashish smoking and seances of Hugo. But I became enthralled as these stories crossed at more than one juncture. Rose carefully wove the stories together, relying on facts about Hugo where she could and tying his experiences to the characters in some of his writing, including the characters in Les Miserables. The author also included an even older story of ancient Druids and their traditions, which worked with Jac's career and her past-life regressions. About halfway into the book, I needed to find out what happened and I raced through to get the answers. 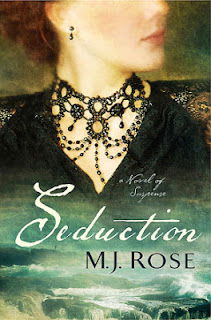 My favorite parts about this book have to be the emphasis on scents. Jac comes from a family of parfumiers, but different smells send her into hallucinations about previous lives. Here's a section from 69% on my Kindle:


But there was something else Jac smelled. A rich and spicy perfume that combined roses, ylang-ylang and oak moss. Trapped in the pages for how many years, a fine French perfume was escaping. It was the kind of scent she had grown up with. Nothing like most modern mass-produced fragrances, but beautifully articulated and rounded. She sniffed at it. There was one note that she couldn't quite figure out, and that note was similar to the mysterious note in Ash's cologne. no, not similar, it was the same note. It was that curious amber she'd found in Fantine's studio.

The emphasis on fragrance definitely made me more aware of scents around me and I wished I had the skill at separating and divining each one like Jac did. 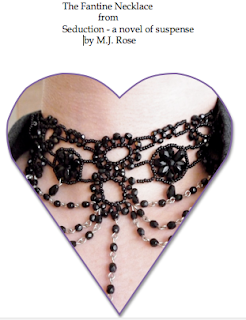 One drawbacks of the story is the initial puzzlement waiting for the stories to come together, but once they intertwine, they are fascinating.
Once all the stories were interwoven and came to an end, I definitely felt that the overriding message came through: Embrace life -- the one you are living now.
The characters were flawed but likable and they all had solid supporting characters so it didn't seem like they would have to face their fears alone.
I recommend this book as a deliciously unfurling, then fast-paced novel of suspense.
Leave a comment and information about how to reach you at the end of this post, and you'll be entered to win a copy of a manuscript page with M.J. Rose's signature. The winner of the page will be entered into another drawing to win the necklace pictured above and on the cover of Seduction.

Here's a synopsis of the novel Seduction as provided by the publisher:

A gothic tale about Victor Hugo's long-buried secrets
and the lengths we go to for love...
In 1843, novelist Victor Hugo's beloved nineteen-year-old daughter drowned. Ten years later, still grieving, Hugo initiated hundreds of séances from his home on the Isle of Jersey in order to reestablish contact with her. In the process, he claimed to have communed with Plato, Galileo, Shakespeare, Dante, Jesus—and even the Devil himself. Hugo's transcriptions of these conversations have all been published.
Or so it has been believed...
Recovering from a great loss, mythologist Jac L'Etoile thinks that throwing herself into work will distract her from her grief. In the hopes of uncovering a secret about the island's mysterious Celtic roots, she arrives on the Isle of Jersey and is greeted by ghostly Neolithic monuments, medieval castles, and hidden caves.
But the man who's invited her there, a troubled soul named Theo Gaspard, hopes she'll help him discover something quite different—transcripts of Hugo's lost conversations with someone he called the Shadow of the Sepulcher. Central to his heritage, these are the papers his grandfather died trying to find.

Thanks for visiting and remember to leave a comment and your  email if you want to be included in the giveaway.
at June 19, 2013

I really enjoyed your review of the book. Thanks for sharing.

I had stopped participating in giveaways but I like M J Rose.

Please do enter me for Seduction. My email id:

This book would be intriguing and special. Thanks. saubleb(at)gmail(dot)com

What a wonderful giveaway. Many thanks for this chance. elliotbencan(at)hotmail(dot)com

This sounds really interesting. Have you ever read Perfume? You have my address. Now I'm going to Amazon to buy the book.

thanks for your great review!

Fascinating to mix history with the paranormal, the past and the present. I am looking forward to reading the book.

This looks like a fantastic book. I can't wait to read it!