What Life Could Have Been

Disclaimer: This is a post I didn't want to write, but like a broken down car in the fast lane, it seems to be blocking my forward progress. So, here it is, more than 30 years after, my attempt to understand.
This week was my sister's birthday. I usually call my parents and we talk around the birthday, not usually about it. My sister, Tammy, four years older than me, died when she was 18 at the Beverly Hills Supper Club fire in Cincinnati on May 28, 1977 -- the night before her high school graduation.
Growing up, we were like normal sisters. We shared a bed until I was about in the fifth grade. I remember playing dress up and tea party and tying up our little brother. I remember lying in bed and talking after the lights were out. I remember the time she asked if I would "freak out" if her boyfriend tapped on the window one night. Yes! I told her.
She seems to have been incredibly stable. Good grades, steady boyfriend, in the chorus of the high school musical The Sound of Music. She was pale and thin, probably not even 100 pounds. She had big brown eyes and a tiny mole that looked like a beauty spot on her face. She liked to curl up on the couch and read, which I loved to do too, but I picture her calm while I was whooping about the neighborhood loud and rowdy. If we played Little Women, I was always Jo and she was Meg. 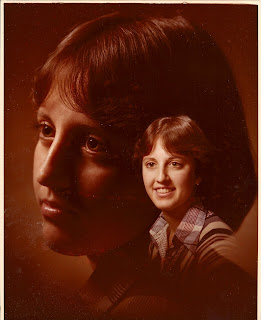 Her life was going places I couldn't begin to imagine. Her high school graduation was the next day. My mom had cleaned the house and gathered food. Relatives were coming, even my grandmother from Kentucky.
That Saturday night I had a Rainbow Girls event. I don't remember where we traveled to -- Blanchester or one of those far outposts. I do remember that Tammy's friend Jane drove me home. We went through a neighborhood in my small town that I couldn't find again, but Jane pointed out a spooky window where someone is said to watch for someone who never returned.
My parents were in the remodeled basement playing cards with another couple. I could hear their laughter carry up through the floor. I turned on the television and plopped onto the couch.
The Carol Burnett show was on. Was it the end of the show or did they interrupt it with news of the fire? I'm not sure now. Did I yell downstairs to my parents or did they come running up because they heard something on the radio? I can't recall. But I remember that we huddled in front of the television watching the place where my sister and her "fiance" Brent had gone to celebrate -- his new job, her graduation. I don't remember when my brothers came home, Craig, two years older than me, Kevin, two years younger.
I tried to stay awake waiting for news. We saw survivors and searched the crowds hoping to see Tammy and Brent. About 2 a.m. I went to bed, my single bed in the small room that I had moved into after we remodeled the basement. I cried and cried.
When I woke the next morning, I remember my mom hugging me and with eyes red and swollen she said they had found her. Hope soared before she continued that my dad had gone down to identify her body.
"They wouldn't let me hold her," I remember my dad crying when he returned. "They wouldn't let me hold my little girl." He seemed frail, this dad who had always been strong. 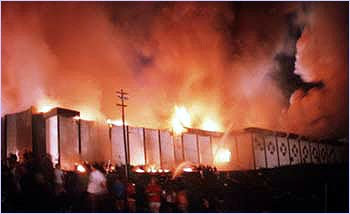 Photo from PBS.org
Her friends filtered through the house for confirmation. Graduation continued with a red rose on her chair. Relatives filled the house and ate the food that was prepared for a celebration.
I selfishly wanted things to return to normal. I wanted to finish all of this so we could be normal again. I didn't understand that normal was gone.
160 people died in that fire. My sister was just one of them. Her picture and her story filled the papers. People called and brought food. Relatives stifled laughs as they reminded themselves of the reason they were all together.
My cousin Kim came to stay. The two of us slept in Tammy's room. One morning, I don't remember how long after, a day, two days, we were lying in bed and the sun was filtering through the curtains. Kim and I talked and we giggled some. My mom stuck her head in the door and smiled, "What are you girls laughing about?" Maybe it was nice for her to stand outside the door and hear girl laughter, to imagine that life might go on. I felt guilty about being happy even for that minute.
I don't remember moping or crying as we passed Sunday and Memorial Day. Some friends who owned a dress shop opened the shop on Memorial Day so I could find something to wear to the funeral. As a 14-year-old tomboy, I owned no dresses. And the stores were closed on Memorial Day -- too weird to think about now.
We held the visitation and funeral at our church. I was okay through the visitation until it was time to leave. We couldn't just close the casket and leave Tammy there all alone. The idea was horrifying. I started to sob and didn't know if I would ever stop. I turned to my parents who were making their way methodically around the church checking the cards on all of the flower arrangements. They couldn't deal with my crying right then. They were too numb themselves.
I ended up sobbing into the chest of the minister, a tall man with a tailored suit that I covered with tears and snot. I couldn't stand the idea of leaving my sister there alone in the church. Maybe the fact that she had died was just hitting me.
The funeral was a blur. My cousin Kim sat with me. My brother's girlfriend squeezed into the pew next to us. We were crowded together in that pew like an overloaded life boat.
I don't remember the burial. I'm sure that I had to block it out because alone in the church was too much, alone in the ground would be unbearable.
After that, life was supposed to return to normal. I missed a few more days of school and was voted into student council -- sympathy vote.
We started the summer and I began a life of how everything would have been different if Tammy had been there. I busted through high school in three years and moved on to college, the one where Tammy had originally planned to go. Each step of my life, I wondered what she would have advised. College, boyfriends, career.
The magnitude of the loss came when I held my baby girl in my arms and thought "I have no idea how to be a mother. If Tammy were here, she'd be beside me offering helpful tips. She'd know how to do all of this."
But she wasn't there when I was married or had my three kids. She wasn't there for the fights or the falling in love. She's not here now as I watch my own daughter approach high school graduation.
Maybe because I now have an oldest daughter at the same place my sister was, maybe I'm standing in my mom's shoes and I can't imagine the devastation. Or maybe I just need to look at the life I've lived and realize that a gaping hole was torn in it that day in May 1977. It's a hole that I can never patch over as much as I try to stretch the material to reach the other side.
at January 10, 2010

I cannot thank you enough for sharing that huge and painful part of yourself with us.

So many assumptions, we've must have made about you, all the while not knowing.

Besides the obvious tears streaming down my face, tissues full of the unmentionable, some of "your best writing yet".

Hugs with Deep Appreciation and Sympathy.

Thanks guys. I know it's something I need to talk about, but it usually makes people uncomfortable, myself included. I end up reassuring people that it's no big deal, when, obviously, it is.

Every time you think of her, she is with you.

No, you can never patch over that gaping hole torn into your life, nor is it possble to ever comprehend a tragedy such as this. You can only continue to add to the life that you were given and live it fully. You do this well Paulita.

Thank you for sharing Tammy with us. I think it's important to celebrate the short life that she lived whenever possible.

I can't imagine the pain that you must carry with you every day. Thank you for sharing your story and for teaching the rest of us to appreciate the days that we have with our loved ones.

How sad to lose a friend or child when they are young. Of course no one ever recovers. My mother lost her brother when he was 14 and their family never really recovered. It's wonderful that you have such good memories of her. What a tragedy. Life can be so hard sometimes.

I can't imagine being attached to someone so wonderful, at such an itimate level, and her being taken away from you. I am so sorry for your pain. You are a beautiful writer.

Thank you for sharing such a sacred piece of you. I can't fathom the loss of a sister and the ripple affect it has on your life. Your transparency is beautiful.

How very sad for you and yours; I had no idea. HUGS

It was just over 10 years ago that a similar type of file happened near where we lived. Over 100 were killed.