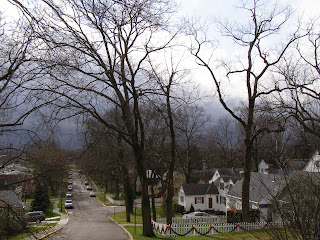 This morning, as I sat at my desk in the dark early morning, listening to the snuffling sounds of my sleeping family, I heard a faraway rumble. I'd already heard the next door neighbor warm up his Land Rover and leave, so I paused, wondering what that sound could be. It could be the train from down the hill chugging along, but that was usually a sustained rumbling. I clicked on WeatherBug and saw that thunderstorms were possible today with the temperature hovering around 44 degrees -- a winter thaw that is welcome. The thunder is like the hand of spring waving, "I'm here. I'll be back."
The warmer temperatures Saturday morning were a relief when I met my friends for our 6:15 a.m. run. In less than a mile, I'd pulled off my fleece and tied it around my waist. We ran the whole way, not stopping to walk and watch deer or adjust socks. The weather must have inspired us. I know it won't be long now before some of my friends are suggesting that we increase those Saturday morning runs from 7.5 miles to maybe 10 then maybe 13. Hope I'm ready when they do!
I'm up early on this Sunday morning, grading papers. I'm teaching eight classes this quarter, about 25 students per class and three essays each to write, along with rough drafts to review. Someone else can do the math because if I were teaching math, the grading would be much easier. There's a right answer and a wrong answer and I would just check it off. Instead, I read through the essay and suggest that they tie back to their thesis and don't forget transitions and remember to use in-text citations.
Friday evening a college coach came to Grace's swim meet to watch her race. We'd already visited his college and it remains on her list. I like the coach a lot - a blond giant of a guy. When the meet was finished, he talked to Grace and said he was glad to see that she was smiling at the end of the race. He liked that she cheered for her teammates.
And that seemed so weird when Spencer's basketball coach recently pulled him from a game because he had smiled.
The college coach's visit left a warm feeling for me, and hopefully for Grace. It was a reminder that she's good at swimming; she's special. It was the final "home" meet for her team this season, her senior year, which, of course, resulted in tears and a bit of melancholy afterward.
Here's Tucker on the left and two of his friends enjoying a smile at the Middle School championships on Saturday. 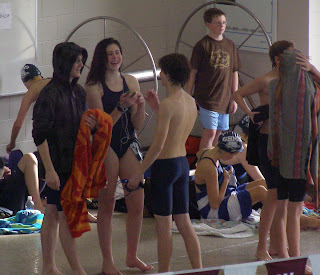 The warm feelings on Friday night didn't carry over on Saturday to the middle school championships, and I'm trying to figure out the uncomfortable feeling I had when Tucker took second place, by less than a tenth of a second, in both of his individual events. He swam well, had good times, but still barely missed first place. I think I'm too competitive. I'm used to seeing him win and I felt sad that he didn't. Then I start thinking maybe it's because he hasn't worked hard enough this year. Maybe I need to push him to practice more and harder.
Then I dope slapped myself and suggested I get over it before I become one of those parents who scream: "Get him! Catch him!" as Tucker is swimming. I need to stick with "Go, Tucker!" which is the cheering I limit myself to.
A weekend of highs and lows, and it's only half over. Who knows what joys the rest of the weekend might bring if I ever get these essays graded!
at January 24, 2010

We are competitive. We love for our children to succeed. The trick is to hide it from them so they don't know about this evil streak. That's why you have friends, so they can know about the evil streak.

"Ideally" it should be up to our kids to decide how hard they want to work and then accept the consequences of that decision (to be intrinsically vs. extrinsically motivated).

It is hard though when you know they can do better. We all want our kids to be the best and to excell in, well, everything.