After wading through proofs and more proofs, we've finally chosen the senior pictures that will go out in Grace's announcements. I remember that it was hard when I was a senior, and that was back in the old days when they actually used film. Imagine how many more shots they can take with digital.
For anyone who hasn't received a graduation announcement lately, the "in thing" is to hand out cards. The cards have the student's name, along with cell phone number and email address. Some of them have Facebook information too. The card has a picture on the front and back, which means we have to narrow it down to two favorite pictures. Here's the photo that we chose for the front of Grace's cards: 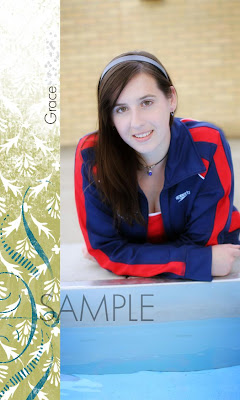 There's something about the way that the blue of the pool is reflecting on her face that I just love.
For the back of the card, she chose a picture because she loves the look of the stones that she's leaning against. It reminds her of a castle in France or Ireland, she says. She's so much like her mother, living in that fantasy world! Here it is with the contact information clumsily blocked out: 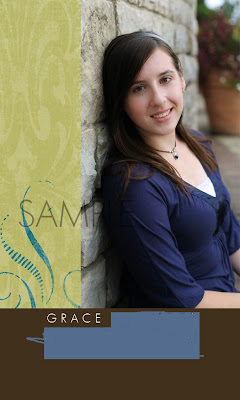 I remember my senior pictures. I wore a maroon velvet blazer, and don't even get me started on my hair with its swoops. I hadn't yet learned to live with my curly hair and they hadn't invented really good straighteners yet.
How about you? What was your senior picture like?
at January 20, 2010

I didn't get senior pictures and neither did Daniel. My kids are doomed they're not going to get any of the traditional milestones. But Grace's pictures are awesome!

Love her pic's! Beautiful! I remember my Senior pic's. Laying on a white sheet with a green sweater dress, white boots, curly short hair. Ha, you've got to love the 80's!

Big hair in soft focus and flipped into two sausage-like curls framing my face, which bears a strange faraway look.

Hairstyles and school photographers seem to have improved...

Sheila, Beth has plenty of pictures so you don't have to worry about senior pictures for her.
Gina and SK, Love those images. Aren't you glad they weren't digital so no one is pulling it up right now to post next to your photo?

Gosh I'm old. When I was senior you showed up at school one day and your picture was taken in a chair, in front of a solid color screen, in the out fit you wore to school. But we did get a few different angles of you sitting in that chair. My family could not afford the prices, even back then. Boy am I glad about that!

Loved the pictures and really love the idea of the card with the email etc... This generation will be forever connected.

Mine? Not so much. I cried on the way to the studio because I couldn't get my "feathered" hair to look right. I went with my boyfriend (god!) and we argued. Not the best day.

I remember those sausage-like curls SK. Quite the style back in the day.

Great photos. I love the one with the pool too. My senior picture-blond hair, ratted and sprayed to a stiff pouf curled up on the ends due to sleeping on huge curlers all night. I don't know how I did that.

We took our senior pictures in a spare classroom at our high school. 3 shots, choose the one where you're not blinking. LOL. Now, my niece took 4 changes of clothes and went to the hairdresser ($100) before hand for hair and make-up. She still refers to it as her "photo shoot"