That's twice now this year I've sat down and tried to meditate. For someone as flighty as I can be, that's not bad.
I've been listening to Elizabeth Gilbert's Eat, Pray, Love on CD in the car. I love that book. At least the eat and pray parts. Funny that I'm not tempted to start making Italian meals to copy the eat part of the book, but I do want to follow the author's lead in the prayer and meditation.
No, I'm not inclined to go to an ashram for four months, or even a month or a week, but I would sometimes like to quiet the thoughts whirring through my head. She talks about climbing through levels and being in God's palm.
I have had times where I've felt like I was above my body, transcendant even, but it was never while I was sitting still. I've had it happen a couple of times while I was running. I never realize it is happening until a thought suddenly jars me -- You'd better get back in your body before you fall or something.
I know, it sounds crazy. How much smarter to have a transcendental experience sitting still instead of running along the road. Maybe that is actually chirunning, where you can leave behind all thoughts of the physical. The body works like a machine while the mind soars above.
My biggest meditation problem is finding someplace in the house to be alone. Our kitchen, dining room and living room are all open together. Even at 5 a.m., I can't be alone because most nights Tucker chooses to sleep on the couch. He's asleep, but I still feel him close by which interferes with my meditation.
I like to sit in the living room facing our big Arts & Crafts window that looks straight out into the trees.
The only things I know about meditation are what I've read, and one time I went to a "Centering Prayer" session taught by Father Vinnie. I think centering prayer is the same thing as meditation. Father Vinnie didn't suggest a Sanskrit mantra, but he did say we should choose one word to concentrate on, one word to bring us back when our minds started to drift.
At the time, I remember I chose the word "Peace."
Then Father Vinnie told us that of course other thoughts would interfere. He said we should think of those thoughts as cars passing on the street. Just let them go past but don't run after them and try to catch them.
So this morning, after I started the kettle with water, the darkened living room called to me.
Tucker and two other boys were asleep in the basement; the television still rumbling before I switched it off.
I sat cross legged on the rug and turned my hands palms up. I tried to imagine a string running from the base of my spine through the top of my head, keeping my back straight.
I had the sound of one of the chants from Eat Pray Love running through my head, and I matched my breathing to it. This morning though, instead of peace as my centering word, I chose gratitude.
I tried to ignore those passing thoughts, letting them scurry by, but it was harder to ignore the cats. Each took turns coming over to rub their faces against my upturned hands, and when the little one started biting my fingers, I pushed him away.
He came back and I pushed with a little more oomph.
Try to concentrate, I reminded myself.
I wouldn't call it a success exactly, but by the time the water on the stove began to churn and boil, just before the whistle, I opened my eyes and saw the cats, both black and white as if ready for a formal night out, sitting in front of me and staring at my face, as if they were my disciples.
I can't imagine I will ever reach the goal Gilbert talks about: being still enough to have a bird land on my head. But I can be sure that if a bird ever did land on my head, my tuxedoed disciples would take care of it pretty quickly.
My cats practicing their own brand of sun worship 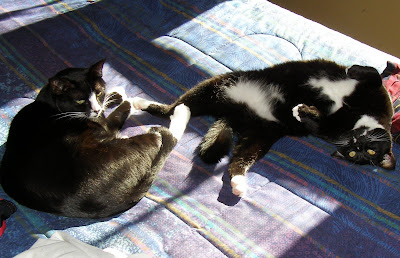 Meditation is something I've always been interested in too, though I've never understood how it works exactly.

I have found that running tends to attract the "whirring" thoughts to my head, to the point that I often listen to music while I run to block out the "whirring". Horseback riding, hiking and kayaking tend to repel those thoughts and quiet my mind, so maybe I'm in a meditative state without realizing it?

hai guys I have text about meditation to, this from hanand crishna