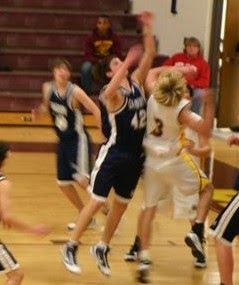 That's my boy in blue going up for the rebound.
Many of you know from my previous rantings, that I do not think highly of sports coaches. I've seen them do so many dumb things. Last night's just made me laugh.
Spencer was playing with the JV team and it was the 3rd quarter. Our team was ahead by a good 15 to 20 points.
We had the ball and were coming down the floor when the small boy (point guard) dribbling had the ball stolen by the other team. Back they all ran to the other end. The other team scored and so the same boy started down the floor for our team again with the ball. Spencer sprinted ahead to get under our basket. Before the small boy reached mid court, he had the ball stolen again.
The next thing I knew, Spencer was pulled out of the game. The coach moved the entire team down so Spencer was sitting at the end in isolation and the coach was in his face yelling. I couldn't hear what was being said, but I could tell from Spencer's posture that he was pissed. His long legs were askew. His mouth curled up at the end in contempt.
I pointed out to the other mothers that Spencer was in "time out."
"He wasn't anywhere near the ball. How could he have gotten in trouble?" I wondered.
He didn't go in the game again for the rest of the night.
When I picked him up from the bus that night at 10:30, I asked him why he was in timeout.
"I smiled," he said.
"What?"
"Yea, coach said I smiled when we lost the ball. He asked me if I thought that was funny."
"So what did you say?" I asked.
His friend Dakota said, "You say, 'I dunno.' And then he says, 'I dunno.' And he's mad."
That just made me laugh. Coaches say the darnedest things.
Now, in addition to his shooting and his jumping and his dribbling, Spencer needs to work on controlling his facial expressions.
at January 12, 2010

I think we need to start videotaping these so-called coaches and then anonymously send them the evidence of their abuse/idiocy/rants. Maybe if they were able to witness their own asinine behavior, they'd think twice before they singled out another kid to humiliate.