My daughter is averse to change. It sends her into a tizzy, and many times, I think I'm not the right kind of mom for her. I have inadequate amounts of patience for her angst.
So the beginning of a new year with the beginning of a new decade were traumatic. Around nine o'clock New Year's eve, she was preparing to leave the party I was at and go to another party. She hugged me and said, "I'm not ready for 2010."
"Well," I said, taking a sip of my pina colada, "you've got another three hours to get ready."
See, probably not too comforting.
2010 is the year she turns 18 and joins the "adult" world. She must picture me with a big pair of scissors cutting the knot between us. She will become adrift in the adult world, forced to make every decision for herself. My mother tells me she hated turning 18 too, so maybe it's genetic.
2010 is the year Grace will graduate from high school and go off to college. These are things to embrace, but she clings to her life, afraid of what may come.
The next morning she was bemoaning that a whole decade had passed. I suppose she may have been old enough to remember New Year's of 2000 when she was 7, almost 8.
"Look," I told her. "You've accomplished so much in the past decade."
Her big eyes looked up, begging me to list her achievements.
"You kept trying out for parts at OperaColumbus until you landed one with the children's chorus. You're in Singers. You do solos at all of the performances. You got a big part in the play and in the upcoming musical. You learned to Irish step dance and continued ballet until you were 12. You can ride a horse and jump the horse, plus you won ribbons for it."
Grace and her dance partner perform at the Ohio Statehouse. 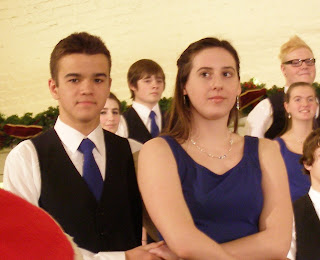 I continued to think of all the things she'd done in the past 10 years. Sailing and swimming and geography bees. Switching from home school to high school was painful, but she has succeeded.
"The only time you need to look back on a decade and regret that it's gone is if you are still in the same place you were when it started," I said.
"If you are sitting at the kitchen table in front of our laptop the morning of 2020 then you need to rethink your decade," I said, looking at her in front of the smooth wood table.
She smiled, a wry smile.
She seemed not to hate the new decade as much and I hope eventually she'll be able to embrace changes, at least the good ones that move her life forward inch by inch.
at January 03, 2010

Very good advice. Change can be scary but it can also lead to some very exciting things. Happened to me.

We are sympathetic, just in a totally non-emotional non-supportive feeling way. As Joe wrote in his diary, "My mom tries to understand, but she doesn't know how to be nice about this". Another failure as a mother

You read his diary?