FranceBookTours -- From Here To Paris Review and Giveaway It's time for another France Book Tours review. This one is From Here to Paris by Cris Hammond.
Ever since I first read A Year in Provence, I've enjoyed memoirs about ex-pats who move to France. This one was no exception. Make sure you enter the giveaway at the end to win a copy of this ebook, which is open to everyone in the U.S. and internationally 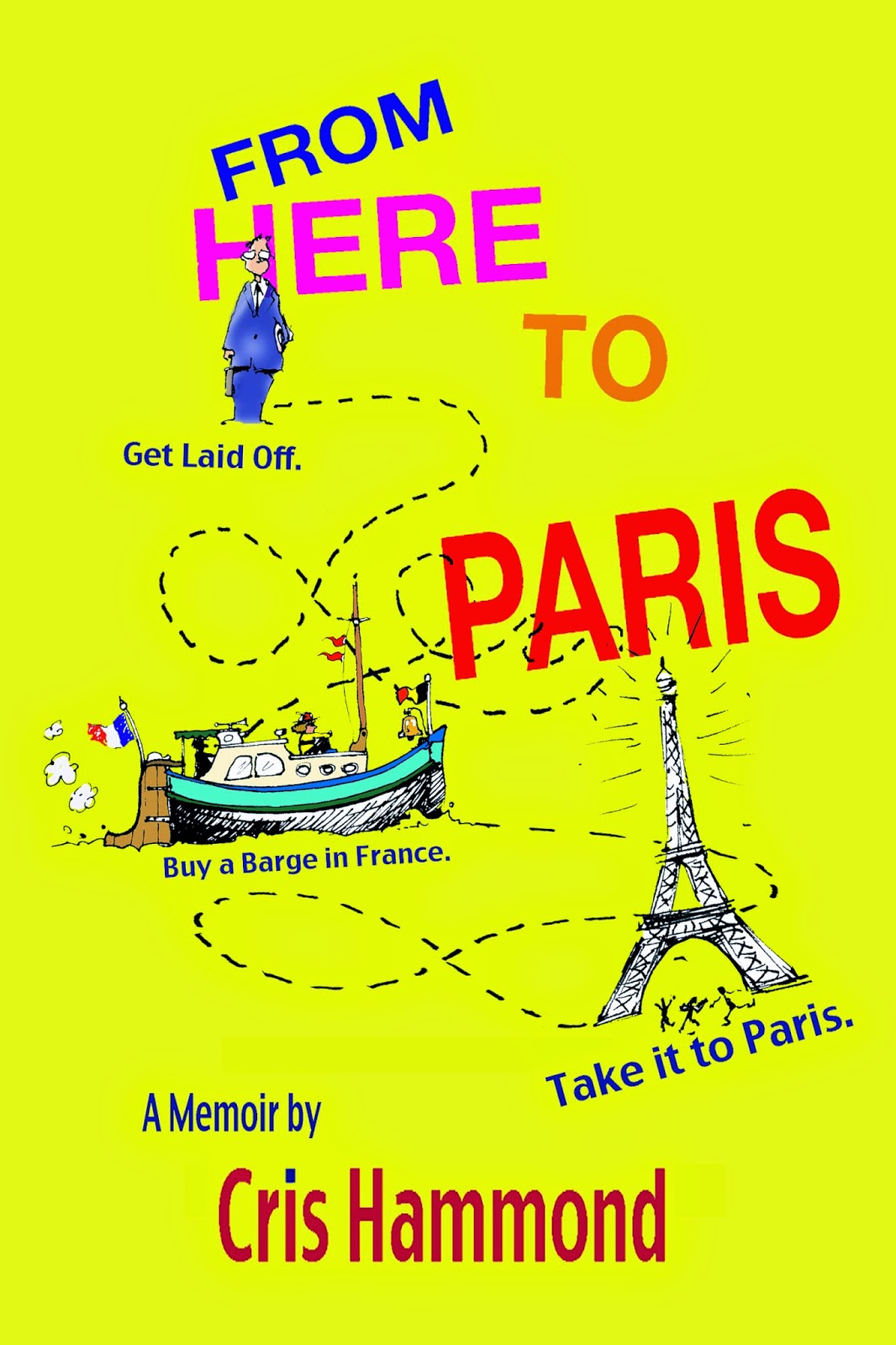 The author had lost his job in California and started a new business taking pictures of boats in San Francisco Bay then selling the pictures online to the boats' owners. During the grueling work, he got smitten by the idea of spending time in France and ended up buying a barge that would travel up the rivers and canals of France. He had to deal with renovations of the barge, learning how to take the barge through the locks without getting bowled over by much larger ships, and life in France. The scenes in France were colorful and took me right there with each glass of wine and each painting the author created. Once he had his priorities straight, living in France, he started drawing and painting again. And he was able to sell his paintings to earn money. It made me nudge my own artistic husband. "Couldn't we move to France if you started painting?" I asked.
My husband read the beginning of this book and enjoyed it -- laughing out loud even -- so I had to buy a copy for him to read too.
The book had a number of funny stories along with remembrances from his childhood and life with his father. One of his difficulties moving to France was the language, like his morning trip to the bakery to buy a croissant.

As I stood there, gazing upon the scene of sensual delights, I would be overcome with a feeling of imminent doom. Since arriving in St. Jean de Losne, I had come every morning to this little family-owned boulangerie presided over by Madame La Pattissier herself, and had asked her for the same thing: one croissant and one baguette. Did her eyes brighten with recognition when she saw me? Did she smile warmly and say, "Bonjour, Monsieur Cris. Comment ca va?" and then reach for her most perfectly formed croissant? Did she call to her husband in the back to bring out the cart of loaves he'd just pulled hot from the oven?
Non! Every morning she looked at me as if I had just run over her cat. The problem was that croissants and baguettes have a sex, a gender, and at that hour of the morning, I could never remember which was which. Normally, I don't concern myself with the gender of pastry, but in this shop it was critical, because I wanted just one baguette and one croissant. There was a female way to say one, which was une. And there was a male way to say it, un. If the gender of the number didn't match the gender of the pastry, in this patisserie you were dead meat.

Although I enjoyed reading about this life on a barge, it definitely convinced me that I wouldn't want to travel through France on a barge. They move so slowly. It would drive me crazy. My husband and I decided that barge travel probably wasn't the best choice for type-A personalities like me. Traveling on a barge might not be my first choice, but I definitely enjoyed reading about it.
Cris Hammond is a nationally known artist, cartoonist, and entrepreneur. His comic strip, Speed Walker, Private Eye, was seen daily in over 150 newspapers across the country, from The Miami Herald to The Seattle Sun Times, The San Diego Union, and The Minneapolis Star Tribune. His paintings of ships and the sea have appeared in galleries in Sausalito, San Francisco, Tiburon, and Carmel, California. He led special effects teams to Academy Awards for Special Effects in motion pictures including Star Trek IV, Innerspace, and The Abyss, among others. In 1994, facing penury, he left his artistic pursuits, bought a briefcase and a couple ties, and went out and got a real corporate job. Eight years and four more neckties later, he walked into his office one morning and was ambushed by the waiting Exit Interview Team, which informed him that he was, as of that moment, “out on his ear.”After a suitable period of bi-polar careening between panic and reflection, he realized that he was too young to retire and too old to go looking for another corporate job. So, he sold the house, bought a barge in France and started painting again.Now he and his wife, Linda, spend half the year in California living and working in their tiny art studio near San Francisco, and the other half doing the same thing on the barge in France. Piloting their 1925 Dutch barge Phaedra, they’ve meandered through more than 1200 kilometers of canals and rivers and negotiated more than 850 locks in their travels from the Rhone wine region, through Burgundy to Chablis and down the Seine into Paris.

You should definitely try it.

I actually read Cris's book not too long ago. I felt like I was along on the adventure—and loved every minute of it.

Anonymous said...
This comment has been removed by a blog administrator.
2:04 PM

thanks for such for your great review. glad both you and your husband liked it. I had not realized either how slow things go on a canal.

this sounds like a fun read.-I am a huge memoir fan.