Every Tuesday, Diane at Bibliophile by the Sea posts the first paragraph of her current read. Anyone can join in. Go to Diane's website for the image and share the first paragraph of the current book you are reading.
My husband just finished this book really quickly and enjoyed it, so I'm going to dive in. The Paris 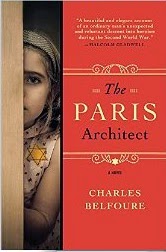 Architect by Charles Belfoure is set in 1942 Paris as an architect tries to design "a secret hiding place for a wealthy Jewish man" that will help hide him from the Germans.
Here's the intro:


Just as Lucien Bernard rounded the corner at the Rue La Boétie, a man running from the opposite direction almost collided with him. He came so close that Lucien could smell his cologne as he raced by.
In the very second that Lucien realized he and the man wore the same scent, L'Eau d'Aunay, he heard a loud crack. He turned around. Just two meters away, the man lay face down on the sidewalk, blood streaming from the back of his bald head as though someone had turned on a faucet inside his skull. The dark crimson fluid flowed quickly in a narrow rivulet down his neck, over his crisp white collar, and then onto his well-tailored navy blue suit, changing its color to a rich deep purple.

I feel like I could use this opening as an example for my Creative Writing students -- the way the main character connects with this everyman who is then shot. The rich details, although they're sad.

I'm joining Teaser Tuesday this week too.
Teaser Tuesdays is a weekly bookish meme, hosted by MizB of Should Be Reading. Anyone can play along! Open to a random page of your current read  and share a teaser sentence from somewhere on that page. BE CAREFUL NOT TO INCLUDE SPOILERS! Share the title & author, too, so that other TT participants can add the book to their TBR Lists if they like your teaser.
Here's my teaser from page 37:


Celeste was walking back from their balcony with a dead rabbit in her hand. It was impossible for anyone but a baby to live off the officially allowed rations set by the French government, so people had to be resourceful. Even well-to-do Parisians had taken to keeping a hutch of rabbits on their balconies to provide much-needed meat.

Oh, you have definitely piqued my interest, with the descriptions, the setting, and the historical significance. Thanks for sharing, and here's mine: “SHE CAN HIDE”

Oh my, what a good intro. It pulled me right in! I wasn't sure what this title was about when I've seen it around, but I do like the occasional historical fiction, so I will definitely consider it for this summer. Thanks for reminding me of it again :)

Yes, I'd keep reading ... I've been wanting to read this -- for the historical aspects

That's a fantastic opening. Although it's gritty, I'd definitely have to keep reading. This sounds like one of those books that stay with you.
My Teaser is from NOT THE MARRYING KIND.

I like that intro and just may add this to my pile. enjoy

That's intense! Definitely an opening that captures my attention right away. I would keep reading. :-)

The historical setting grabs me, I would keep reading.

Yes that opening does draw you in & make you want to keep reading!

That opening paragraph is amazing. I see why you'd want to share it with creative writing students. It makes me want to read more.

You are right, there is a lot of information about the characters already in this opener and it still hooks you in, so an excellent example of good writing IMHO