This morning, I'm a bit hoarse from all the cheering I did yesterday. It was one of those hectic, yet satisfying days spent supporting our boys in their athletic endeavors. And though the boys weren't always victorious, I'm proud of their achievements.
The day started when I dropped Tucker at the high school at 7 a.m. to catch the bus to the swim meet. I had dashed into Panera to get him bagels and we pulled up right at 7. He climbed on the bus, the swim coach stepped off, and the bus drove away at 7:02 a.m. I sat in the car for a minute, then turned it off and walked over to the rubberized track to run a few miles.
The swim meet, the league championship, started at 9:30 and we got home around 3. So it was a long day. But our boys team came in 3rd, the highest they've ever placed. Tucker swam in two free relays. You know the freestyle stroke: that's the one people sometimes call the crawl. In the final relay, our boys were four points behind the second place team. If they won the relay, they could pull into second place. 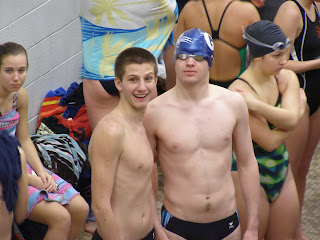 Two senior boys, along with Tucker and his best friend Josh, who are sophomores, swam the relay. Tucker went last because Josh said he couldn't stand the pressure. Usually, the fastest swimmer goes last, and Tucker and Josh trade places as to who is fastest. I wish I could tell you that when Tucker dived in, a great arcing dive as Josh touched the end of the lane, that he pulled them into first place. He didn't, but he swam an amazing race and came in 3rd by hundredths of a second. All the boys had good times.
As an exhausted Tucker pulled himself out of the pool and walked around the corner toward the coach, he stopped in front of the stands where Earl and I sat. He looked up to the balcony and held up his hand with a 5, then a 2, then a closed fist and a 1. His time swimming the 100 free. 52.1 seconds. That's his fastest time ever. But the real thrill was that he wanted to take the time to share it with us, his parents.
He was exhausted, of course, and so were we. After a brief rest at home, plus some paper grading, we went out into the cold night to watch Spencer play a basketball game.
They played a team that had beaten them by 20 points last game and our team was tied with them for 1st place in the league. 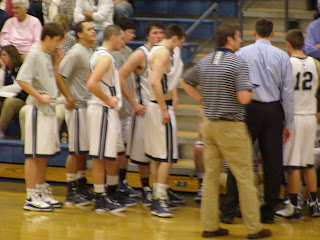 At the half, our team was ahead by two. The second half, Spencer started with no fouls, which is unheard of for him. In the third quarter he got four fouls -- many of them questionable. In the fourth quarter, his nemesis on the other team gave him his fifth foul by jumping into the air and landing on his back. What? All the parents screamed. How could that be a foul on Spencer? But it worked twice as the same guy gave our other big guy his fifth foul by landing on his back.
We lost by 4 in the end, but the team played hard and Spencer scored 11 points.
We returned home at 10. I had two more papers to get graded by midnight and with a scratchy throat I fell into bed at 11:30 after a hectic day.
at January 29, 2012

Certainly a busy day of HS sports! So much fun and such a great experience for our kids.

What an exciting play by play. And I'm exhausted and happy after just reading.