We moved to our school district five years ago when Spencer was in the 8th grade. I had homeschooled the kids til that point and Spencer wanted to go to school, in part, to play basketball.
Every year since 8th grade, they have lost basketball games to a school that is run by a mega church. Now, I could complain about how the mega church recruits players and gives scholarships, while we're a small public school, but last year they had their comeuppance. They were found to be in violation of rules and most of their superior players deserted the school.
Our team travelled to the mega church's gym this weekend and our boys won. Here are four of the players, the three from left to right are seniors, who have been there to see every defeat for the past five years. In the picture, they're watching a teammate shoot foul throws. You can tell from their contemptuous or righteous looks that they were happy to see the end of the era of domination. That's my little boy, Spencer, on the far left. He scored 12 points and had 7 rebounds, all in the second half. 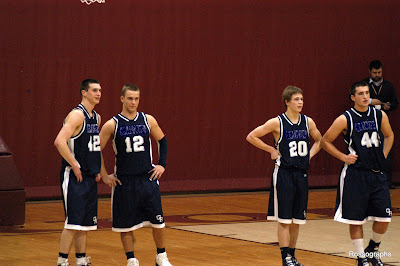 It's so nice to have a win. Is your son going to play basketball at all in college?

He says no to basketball in college. Of all my kids, he's the only one who has the passion. He loves to play. When he and his friends aren't practicing or lifting weights with the coaches, they're playing basketball in the park. Oh well, his choice.