Talking to a grown up nephew is, well, awkward.
I see it on both sides of the family.
The nieces always seem to have a lot to say. I can ask them questions about studies and jobs and life choices. The guys generally answer in monosyllabic grunts of yes or no. I'm sure I'm not the only one who has this difficulty because I've seen my adult relatives feel the same awkwardness when trying to talk to my teenage boys. Sometimes I'll jump in the conversation with stories, illustrations. My boys rarely volunteer examples.

Tomorrow, my nephew Michael comes back from Afghanistan. Our family will meet him at the airport. The crowd of well wishers will probably prevent one-on-one conversation, but some time in the week that he's home, I hope to get some time to talk with him. And I need a plan so I can have a real conversation.
Michael was the first child of my siblings, a surprise baby the year my little brother graduated college. I had just finished grad school and taken a job in far away Florida but I immediately fell in love with those big brown eyes and the unruly brown hair of his. My brother and his wife would travel to Florida to stay with me for vacations and I loved spending time with Michael. I gave him his first haircut and cleaned up his puke from too many chocolate donuts. 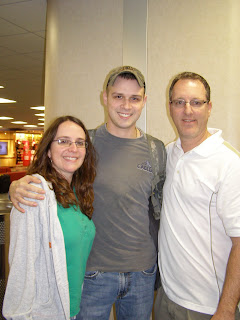 He was an overactive little guy and found mischief wherever he went -- like the time he stuck the tweezers in the outlet of my makeup mirror blowing the circuit or when he stamped his foot during our visit to the llama herd. He got a sword at Disney World and broke it the next day before making up the saddest song ever about how "Michael breaks his toys..."
It's strange that after sharing an aunt/nephew life with so many good memories, we now have awkward silences.
Michael is 24 now and has been in the Navy for five years. He volunteered for duty in Afghanistan rather than going back on the nuclear sub he has served on in the past. I'm proud of all he's accomplished, but there's not much of a response to "I'm proud of you."
So, any suggestions on conversations with young men who, when they were little, climbed in my lap, and now have nothing much to say?
at January 16, 2012

I'm sure you'll come up with the right questions to get the conversation going. And maybe he has finally reached the age where he can converse more freely.

BTW if you want to get Daniel going in a conversation that may never end just ask him about SOPA, or Intelligent Design, or the creation of the world. He has all the answers and he's happy to share them with you. :)

You always say the right thing. I can attest to that. I think just being with them tells them more than any conversation we engineer.

I have no suggestions really. I have family that is hard to do. I have found that I become a chatterbox talking like crazy to fill the silences. Maybe ask him his plans now that he's back?