So, I hope that some of you visit my blog regularly enough to notice that I haven't been posting as frequently, or as interestingly, as in the past. This is my excuses post, so you feel bad for me and give me a break. JK.
I am kind of bogged down teaching seven college classes. Add to that basketball season, which means games twice a week, plus breakfasts twice a week for the team. 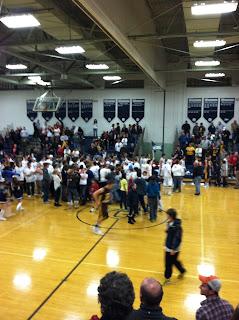 (I'm not sure if it's this way everywhere for high school basketball, but we feed these boys constantly. Breakfast from Panera, dinner after school from a local restaurant, Subway for the bus ride home from the game. On the weekend, we make a "spread" at someone's home and serve them that. This weekend I did waffles with blueberry sauce, cheesy potatoes, fruit, and another parent brought 8 pounds of bacon plus 4 pounds of link sausage! Do they think the parents can't feed them?)
Then Tucker is in high school swim season. We don't feed them as much, but the meets always seem to be far away and last for several hours. On Monday we drove to 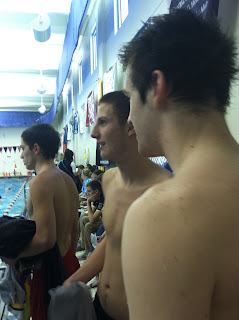 Marietta. I carried the swimmers' bags in my car so I followed the bus and it took two hours and twenty minutes. Next a three-hour swim meet and then a two-hour drive home.
So if teaching and sports were not all that is going on to keep me away from my blog, Grace is home for one more day. She goes back to school tomorrow.
Sometimes it's hard for me to process the fact that she'll actually be gone.
In spite of deciding that this far away school is the right choice for her, she's feeling very anxious about returning. I have tried to be supportive, saying things like, "Remember how nervous you were before you went the first time" or "This is nothing compared to staying in France for three months alone."
As her anxiety continues to rise, I decided tough love might be better. "Everyone would prefer to lie on the couch and watch America's Next Top Model rather than going to school or working..." or "It's what kids your age do. They go to school. It's not a big deal." 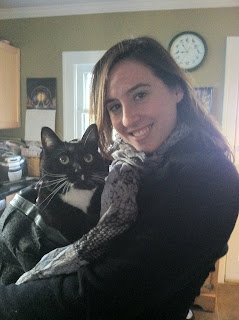 Truthfully, if Grace doesn't go away to school, then I have failed at the process of raising her and setting her free. What Mama bird wants to set her baby bird free and the bird decide to stay in the nest?
I know Grace is just nervous because she hates change and because last year at this time she became depressed at school. She can't handle the idea of feeling like that again. I don't want her to feel that either. But she chose to return to this school and so we need to march onward so she can stop anticipating the bad.
So those are my excuses for why I haven't been blogging as much or commenting on other people's blogs.
Forgive me, but I see no respite in sight for another month or so.
at January 19, 2012

Not as much but absolutely as interesting and wonderful ....

No worries. I'm just too self absorbed to blog myself...too much going on or not going on and I'm a victim of reality tv...especially the Housewives of Beverly Hills, Lord help me.

Lucia you and I could talk... right there with you on the Housewives and I love watching Andy Cohen's show after wards to see if he and I agree... Ha !

You certainly have ample reason to take a break from blogging ....I on the other hand, have no such excuses .....good luck with it all!

Don't apologize. It all sounds exhausting. Do you listen to audio books while in the car? I used to do that when I had to drive 2 hours to another city. It really helped pass the time.