For my birthday, I received a Fitbit.
Now, everyone who reads my blog knows that I'm already a bit obsessive about exercising. I run, no matter the weather. I walk to the library, the coffee shop, the post office and sometimes even the grocery store. I also lift weights at the gym.
So maybe the Fitbit wasn't a good idea -- encouraging someone who already focuses a lot on exercise.
A fitbit starts out set at 10,000 steps, 5 miles, 30 minutes of exercise, 10 flights of steps, 2,100 calories.
Most mornings, I would hit 10,000 steps by 8 a.m. after my run. All the other goals I would surpass easily.
Eventually, I moved the steps up to 15,000.
Then the app on my phone got in the act. It started asking for 250 steps from 7 a.m. to 4 p.m. (You can set that for whatever time parameter  you want. I moved it up to 7 a.m. since I'm  usually active then.)
It got a little awkward when I'd be pacing around my classroom trying to get to 250 steps. Or I might be having a conversation with someone when I would suddenly jump up and say, "I have to get my 250 steps." Then I'd run outside to walk quickly before the hour changed over. At the end of the day, if all nine hours had
One Sunday, as we were headed to a family reunion, I took my Fitbit off. My wrist felt bare but I didn't want to run away in the middle of a conversation with an 80-year-old relative.
I forced myself to leave it off for two days, even though I itched to put it on and get my steps in.

When I went back to wearing my Fitbit, I realized it wouldn't charge. A piece on the back that clips in had come loose. I nearly panicked. How would I keep track of my exercise?
What could have been a disaster, became a very easy fix.
Fitbit exchanged a few emails with me and said they'd send me another one. It's even an upgrade. 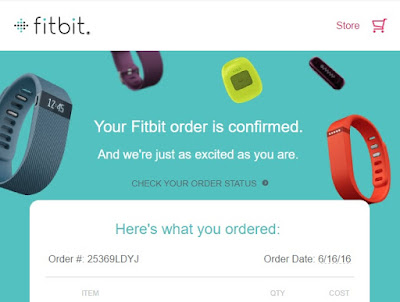 Soon, I'll be able to resume my obsession with my steps.

I just got one for my daughter because she likes to spend the entire weekend in bed, watching videos on her phone. I hate harping at her. We had a discussion about being active, and the Fitbit does the rest. Yesterday she got up to 10,000 steps for the first time, and even surpassed it. She was so proud to tell me about how surprised she was when the Fitbit went off when she hit 10K.
I want to get one for myself because as a writer I spend the majority of my time at the computer. Just for a reality check. That's what it is for my daughter--a reality check that she really hasn't done enough activity.

Francetaste, Yes, for people who would prefer to be sedentary, it is a nice nudge. And even for those of us who spend our time at computers, it's good to be reminded to get up occasionally

Good for you! Hope you are back to your steps goal very soon. I am still aiming at 10,000 steps in a day. I'll get there!

Judy, It does add motivation!

Roz, That does add more steps than I expected, but I'm still addicted to exercise of all sorts.

This is hilarious. I walk everywhere like you-ok a combo of walking and riding the bike. As a criminal attorney I am on my feet all day in court-I would be curious to see where I would get in a day. Yesterday I biked 55 miles -it was our first hot day and I all wanted to do was take of the shoes-my feet were on fire. We went out in the eve to a local event and of course we rode our bike.

I am wearing my FItbit right now and laughing! My goals aren't anything like yours but I do love when my Fitbit explodes with fireworks, rumbling on my wrist when I reach my 10,000 steps. That usually happens in the late afternoon, I don't run but I do take a 2 and a half to three mile walk every morning, then it's a game to get the rest of the steps in. And I love those little reminders! I do the same thing, jump up and do laps around our townhouse. LOVE!

Did you consider exchanging with the best Bitcoin exchange company - YoBit.