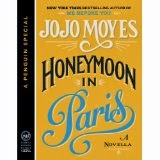 Just yesterday I downloaded a book from the library, Honeymoon in Paris by JoJo Moyes. That's the first time I've borrowed a download,  and it was so simple. Then I went to the gym and hopped on the stationary bike, and before I knew it, I was almost finished with this short novel,
Here's the intro:
2002


Liv Halston holds tight to the guardrail of the Eiffel Tower, looks down through the diamond-strung wire at the whole of Paris laid out below, and wonders if anyone ever, has had a honeymoon as disastrous as this one.
Around her families of tourists squeal and duck back from the view, or lean against the mesh theatrically for their friends to take pictures, while an impassive secrity guard looks on. A glowering clump of storm clouds is moving toward them across the sky from the west. A brisk wind has turned her ears pink.

It's a lovely escape to Paris with two honeymooning couples, one during 2002 and the other during 1912. The 1912 couple is the painter Edouard LeFevre and his shop-girl wife, Sophie, who was also his model.
I'm looking forward to seeing what everyone else is reading.

Wow, I love this author...and I haven't come across this book before. Thanks for sharing...and who doesn't want to go to Paris, if only through a book?

Here's mine: “THE WEDNESDAY GROUP”

This is such a popular author. This sounds like a fun book. I would keep reading.

I loved this novella... It's actually a prequel to her novel The Girl You Left Behind.

Borrowing ebooks from the library is so quick and easy, I do it all the time!

this sounds like a fun read. I'd read it. Have a nice week. kelley—the road goes ever ever on