Tribute to the Man on the Moon

I don't want to sound like Forrest Gump, always inserting myself in famous situations, but when Neil Armstrong died this week, it reminded me of my childhood. 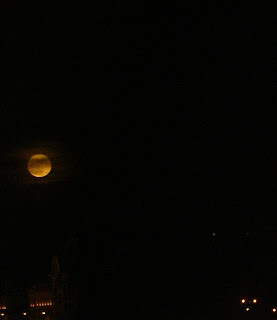 I'm too young to remember watching the moon landing on TV, although I'm sure my parents plunked me down in front of it to see the historic moment. What I remember about Neil Armstrong was going to school with his son, Mark, who is my age.
Somewhere around 4th or 5th grade, the Armstrongs moved to Lebanon, Ohio, my hometown. They bought a big green farm house on a winding road, and Mark attended the same middle school as me. Well, there was only one middle school for our little town. It's the same school that you can see in the movie Harper Valley PTA which was filmed in our town.
I'm not sure when Mark and I became friends, but my mother later told me that his mother always made sure Mark and I were in the same class, because she thought the competition was good for him. Who would be surprised to learn that I was competitive about getting the best grades in class?
So throughout middle school, Mark and I shared a classroom and around about 6th grade, we started attending boy/girl parties and going on outings to Kings Island amusement park, which was close by. 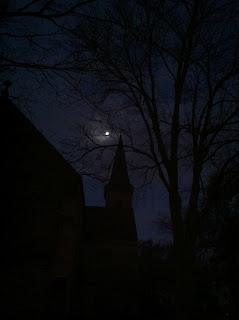 Apparently, our paths diverged in high school, and I ended up graduating a year early, so I didn't see Mark again, although my dad told me he asked about me one day when Dad saw him at the local YMCA.
Just last month, I found Mark on Facebook. I sent him a message about his complicated science majors at college. I have politics on my Facebook page, and Mark let me know right away that he disagreed with my politics.
I replied: "Yikes. Launching into politics first thing? Can't we talk about Kings Island in 6th grade instead?"
I was afraid my friend Mark was lost to me forever.
Luckily, he messaged back letting me know he retained his wit: "Too soon? But, uh, you did put it out there on your home page which makes it fair game, right? Actually, I'm quite happy to stay away from politics. So, do you prefer the blue or the red Racer. Do you like to ride forwards or backwards?"
The Racer is the original roller coaster at Kings Island, and I'm sure many of our conversations in middle school centered around which was the best. 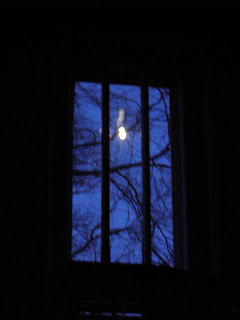 But the whole idea about politics being "fair game" made me want to retort, "We aren't competing any more."
I was in the midst of delivering kids to school, so I didn't message back, not until this week, when I heard his father had died.
I avoided mentioning the obvious, that it's weird to hear that someone's parent died on the news. Mark's dad didn't just belong to him; he belonged to the whole world as the first man to walk on the moon.
So Mark will always have to share his dad, but right now, he's the one who is suffering the loss.
Tonight, when I look up at the Blue Moon, the second full moon in one month, I'll remember Neil Armstrong, the man who made history, and fathered my middle school friend.
at August 31, 2012

Hey Paulita - your first line about Forrest Gump made me laugh. Your last line made me cry. I'm glad you 'inserted' yourself in history.

I've read that Neil Armstrong was a very private man and did very few interviews. How scary that must have been. Apparently, there was a good chance they wouldn't get off of the moon. August 31st is also the day that Princess Diana died 15 years ago in Paris. Not one word in the media about her yesterday for some reason.