My Shot at Fame

When I was in ninth grade, our little town of Lebanon, Ohio was chosen to film a movie. A big Hollywood movie. Harper Valley PTA.
Now, you may think that the honor was rather dubious. Unfortunately, that little town I lived in was perfect for a movie about small town backstabbing and politics. 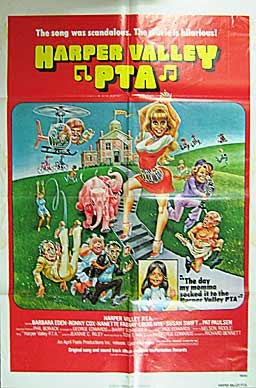 The authentic downtown has an ice cream parlor, antique stores and The Golden Lamb, Ohio's oldest continually operating inn (a place I later worked as a hostess).
The main attraction though was Berry Middle School, an old school set atop a rolling lawn. I'd gone to school there fifth through eighth grades. My mother taught there. I remember she told me that during the filming the teachers were not allowed to adjust the shades in the windows so that the shots always looked the same.

The movie was based on the song and had a far-fetched plot about a slightly loose mother whose daughter will be punished by the school board if the mother doesn't conform. As the quote on the movie poster says, "The day my momma socked it to the Harper Valley PTA." The mother gets back at the school board by exposing their own questionable behavior.
So why am I telling you this?
Because I was an extra in the movie.
It's funny because I haven't rented the movie or searched for it on Hulu. I haven't watched it since it came out in the theater and I saw myself on screen for a split second licking a peppermint ice cream cone. If you want to look for me, I had on a maroon wool sweater, crew neck. I had out of control hair that I tried to straighten and then flip backward from my face.
So here's what happened, somehow, I got signed up to be an extra in the movie. Every kid in school must have wanted to be an extra, I don't know how I got on the list ahead of others. There were a bunch of us though.
We got to leave school for the day, taken on a bus downtown to the ice cream parlor. The ice cream parlor was a place we'd hung out since we were old enough to leave our parents behind. In addition to ice cream, they sold hamburgers and other food. Think of it like the burger joint in an Archies comic book.
We were all sat at tables in the ice cream parlor and given treats. I had a sugar cone, the pointy brown kind, with peppermint ice cream. I'm sure some of my friends were in the movie too and we sat together.
The scene in the ice cream parlor involved us all eating and talking when some main characters come running through. We shot the scene over and over. At one point, Craig Colston, a friend of my older brother, got to be pushed over by the main characters running through the ice cream parlor.
At another point, we were all herded outside to stand in line before they brought us back in for more shooting. I remember licking that ice cream cone quickly in the sun so I could get another one before the next shooting began.
What I learned about movie making that day: repetition is dull.
The pay I received: a day off school and two free ice cream cones.
Even today, that might be enough of a reward.
P.S. I found this youtube clip that shows clips from the movie set to the song. Note the very fashionable clothes that the students are wearing. Guess that was what I looked like. Sorry, you know my links never work on this blog so you'll probably have to copy and paste, but here it is anyway.http://www.youtube.com/watch?v=4ivUOnnstpg
at November 02, 2010

I love that song. :) I think we'll have to rent that movie to watch this weekend. Thanks for reminding me.

That was your school. OMG. I once planned to stay at that inn. Small world and you seem to have been in every corner of it.

I played the didn't realize how much I missed that song.

Okay, how can you guys love that song?

Just when I think you cannot possibly surprise me more ... !

Ok, I'm in for movie night.

I remember that movie and I loved the song too. I'll have to see if I can find it.

The aerial shots of Lebanon are excellent and show are the close ups of the town's landmarks...eg. Glendower, Berry Intermediate School, Town Hall, even the Electric Department.

I went to Barry middle when the movie was filmed. Had no ideal there was a movie being filmed. Till I saw the picture. I guess I wasn't in the loop. I was young sorry you had a bad experience. Wish I could been a part of it back then. I couldn't wait to get out of that little town when I was young. I miss it now! Revisited years ago. Can't and won't afford it. Still got fond memories. What can I say childhood memories.