Am I a writer? If you had observed me for the past month, you would no more call me a writer than you would call me a runner. I haven't climbed out of bed early in the morning and sat before the computer, my fingers scrambling along the keys as the ideas pour out. I haven't turned off the college football bowl games to find a quiet corner where I can write. I haven't packed up my computer and slid along the wooden bench at Caribou Coffee, sipping from a macchiato. For the past month, maybe the past four months, someone tracking me would not have much evidence that I am a writer. The day after I turned in grades this quarter, I woke up and went for a run. A huge, 15-hour load lifted from my shoulders. But I didn't return to my new novel.
"I told you not to burn the house down," my 16-year-old daughter said when I left the story on the computer one day. Maybe she's right. Maybe my story has taken a turn that leaves me stymied, or maybe I've been led astray from what I thought was my purpose in life.
So, now, as I face 2009, what am I going to do about it? I've wanted to be a writer since I was a little girl. I think it was around second or third grade that I would get up, before anyone else in the house was awake. I would pack a peanut butter sandwich and gather a spiral notebook and pencil. Then I would roam the neighborhood looking for adventures to write about. I would end up back in my front yard, under a big maple tree where I would scribble furiously, not just the things that I had seen, but the things that I imagined.
I have boxes full of old notebooks that are scratched with my childhood musings. What will I do about that as an adult? I have two novels written and a third one in the works.
I am a writer, and that doesn't mean that it flows spontaneously. It may mean that I have to set a schedule and follow it until once again, my passion for writing, my need for it is stronger than my malaise. I know I can.
I am a writer.
at December 31, 2008 No comments: Links to this post 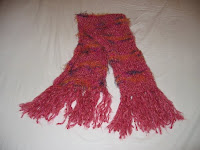 If I'd only known that puking in the parking lot foreshadowed my week as a college teacher.
Picture a bustling community college campus. A brisk breeze whips between the buildings, as it does on every college in the United States, and there strides a woman, leaving behind an office building as she heads toward her classroom. She wears a brown wool coat with a shawl collar. A fuzzy pink scarf peeks out from the v in her coat. Her steps pause there, by the parking lot where a bed of dead, dried plants wave in the breeze. Her hand goes to her mouth and she bends over them, spewing orange juice and shredded wheat.
And that was Monday.
Yes, after 40 something years, I didn't make it to the bathroom to throw up. Embarrassing, yet slightly fascinating, apparently, since I keep telling everyone. I think I'm kind of intrigued by the idea that I assumed I could force myself to keep going, no matter how bad I felt.
But, as I said, that was only a foreshadow of the pain and misery to follow. That Wednesday in class, I had to tell two clean-cut boys that I couldn't see them passing class. The one boy, a tall, blond, paled and began to shake a little bit. "But I could have my third essay to you today." The essay was due on Monday and he hadn't even turned in a rough draft. "Sorry, I don't accept late work."
The other boy tried, his hair shaved close to his head, his smile appealing. "I have my rough draft and final draft right here." "But, you didn't turn in your rough draft. I have to see your process work."
I was feeling bad. Maybe I didn't have to be so strict. I pulled out my gradebook where I keep attendance. "Look," I told the blond boy, you haven't been to class since November 7. Today's December 3." The other boy hadn't been there since Nov. 11. I tried to put my guilt behind me. They needed to attend class and turn in assignments on time. It wasn't my fault.
I spent the next morning grading papers of students who had gotten their assignments in on time. I gently explained to one guy that when he used someone else's material exactly, it needed to be in quotation marks and credited. Otherwise, that's called plagiarism.
Then I went on to the next paper that had strange blue hyperlink's underlined. I clicked on one of the hyperlinks and went to a Wikipedia page. Not only had he copied and pasted the essay directly from Wikipedia, which isn't an acceptable source, but he had left the hyperlinks. This was definitely an insult to my intelligence. I just wanted to walk in front of a fast-moving bus by this point.
Today, I girded my loins and handed him back that paper. "What happened?" I asked.
"I was just really swamped," he said.
"I don't think that was the solution," I said.
He came to the front of the class and asked whether he could still pass the class. I let him check his grades on the computer. Not much chance, he decided.
I wonder what he'll tell his parents and his friends. Will I be the villain in the story?
I try to assure myself that this hasn't happened in other classes. Students have perservered and written their own work and succeeded. But the weight remains on my shoulders. Maybe puking in the parking lot was the highpoint of the week.
at December 05, 2008 3 comments: Links to this post