To participate in the Saturday Snapshot meme post a photo that you (or a friend or family member) have taken then leave a direct link to your post on Alyce's blog At Home With Books. Photos can be old or new, and be of any subject as long as they are clean and appropriate for all eyes to see. How much detail you give in the caption is entirely up to you. Please don’t post random photos that you find online.
My son Tucker, 17, is a junior in high school, and this year the school is putting on the musical Legally Blonde. That is not a musical, or even a movie that I had seen. All I knew about it was Reese Witherspoon, so when Tucker told me he got the part of the UPS guy, it didn't mean much. All he told me was that the female character describes him as "walking porn."
Here he is, wearing a blonde wig, because his hair is still growing in from where he shaved it for the swim team state meet. 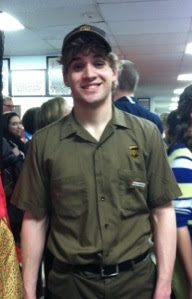 I got to see the show Thursday evening after work and Friday evening. It always amazes me how good high school shows can be.
Tucker's part isn't huge, but last night, he literally stopped the show as people laughed and then broke into applause after his first line. He first swaggers across the front of the stage carrying a box. The musicians play some strutting music for him, similar to bow chicka bow wow... He nods his head and raises his eyebrows at a few audience members and they're all laughing before he gets to the other side. So when he walks into the salon and says, "I've got a package." Everyone howled with laughter. The actors had to hold their poses for nearly a minute while people laughed then clapped.
Here is Tuck with a few other cast members after the show. Those black eyebrows really stand out against the blonde wig. 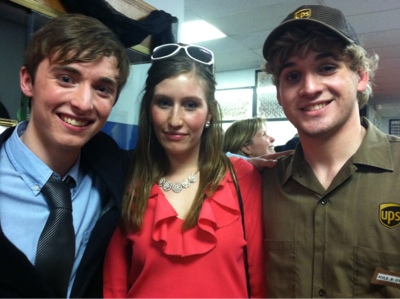 Hope you all are having "yourself a super day."

Congratulations to your son & the cast of the play.....you must be a very proud mom!

I just saw this at our local high school - what a fun production. And that is a GREAT part - I'm sure he was a scene stealer! love it! :) -beth

You must be so proud of him!

And...thanks for stopping by my Saturday Snapshot.

Always great to see your children in a performance isn't it? This looks like an exciting production. Thanks for sharing these behind the scenes shots.

So fun! Glad your son is having a great time!

I want to see this on the stage. Congrats to your son on his role.

This sounds like a lot of fun and you must be so proud of him!

I spent last night with some friends, watching their son in his school production of Bugsy Malone, and it was brilliant - hope you had as much fun as we did! My Snapshot is at http://goo.gl/9qx5javascript:void(0)t

I've seen the movie - that truly is a hilarious moment. Congrats to your hunk!

Now I'm realizing how long it's been since I've seen any school's dramatic productions..either high school or college. This one looks like a fun event...congrats to your son for bringing down the house.

I've seen a few high school productions in the last few years and have been astonished at how good they are. I haven't seen this play or movie either, but it sounds great. How fun to see your son steal the show like that. Congratulations.

How wonderful to share such a stellar moment with your son :-)

I love theater and wish my boys had any interest in being in the spotlight. Glad you enjoyed the show!

I love that movie. Sounds like your son knows how to work a crowd :)

I didn't realize they turned Legally Blonde into a musical! As soon as you said what part he played, all I could think was "bend, and snap!" Not sure if that piece is in the musical, but it happens right after the UPS guy in the movie :)

I saw that movie years ago... I bet the play was lots of fun.

Congratulations to your son! I'm sorry that we missed seeing the play while we were there, I know I would have liked it. I'm a huge fan of high school theater even though I only had bit parts when I was a teenager.

Very cool that your son got such a long-lasting laugh with his line!