My novel received its first negative review yesterday on Goodreads. I had been lecturing myself before this, warning myself that I needed to be ready for a negative review. I mean, everybody gets some bad reviews.
But I didn't expect it to send me into such a tailspin. 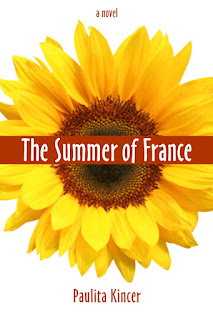 The reader gave me 3 out of 5 stars on her Goodreads review. Some of the comments she made, I could see. She wanted the main character Fia to be stronger. But, of course, Fia is stronger by the end of the book and she has to grow from being a bit of a pushover. The reviewer also wanted the French flirtation to have a "happy ever after" ending, which, to me, would have made Fia weaker. So those criticisms didn't hurt too much.
The thing that really got to me is she said the book (she read the actual paperback) had a lot of grammar and punctuation mistakes.
Being self-published, I felt like the grammar, punctuation, typos, all needed to be eradicated to increase my credibility as a writer.
Since I am an English teacher, criticism of grammar and punctuation goes straight to my heart. I plunged into despair, imagining my words going out there flawed.
I was in the middle of some promotions for my book and I simply stopped, thinking what's the point if there are grammar and punctuation errors. A gray cloud descended on my mood and rested there.
I mentioned the errors to my husband, the copy editor, and he asked whether I planned to fire him.
I texted another college teacher friend who read the book and asked if she'd seen them because I can make changes to correct them.
"I honestly don't remember a single one," my English teacher professor responded.
So, I was feeling a little better.
The reviewer mentioned that she was British so I wondered if there could be strange punctuation differences between the U.S. and UK. But I read plenty of British Lit and haven't noticed it.
I comforted myself a bit more by finding a typo on page 4 of Mr. Penumbra's 24-Hour Bookstore, published by Farrar, Straus and Giroux. If this top seller book has typos after all of its editors, I supposed I should expect them too.
I'm still feeling a bit down about my writing, but hopefully I'll bounce back eventually to publish some more flawed writing.
at March 01, 2013

I'm sorry. Of course everyone isn't going to love your book--think of all the well-loved and respected authors that you don't enjoy--but that doesn't make it hurt any less.

Remember a review is just an opinion - and still a 3 out of 5 is not bad. For me, that means an average read and I rate many books 3's. To be a 4 you have to be out of my normal likes, and to be a 5 you have to have blown me away :)

Hello Paulita .. how sad, I am reading your book right now. ..started it yesterday and I had to force myself to put it down!! I have not come across any punctuation errors at all ... I think the only problem would be that a few of the words we use, might not be the same as US English ... like "gotten" and maybe a few others, but not a problem to me. IF I do come across any , I will let you know .. but so far it has had me in hooked on the story line :-)

Thanks, Ali, Sheila and Anne. I guess by writing this blog post I am just fishing for reassurance. You guys came through

Cheer up Paulita, you still have an average of 4.27 on Goodreads, which is huge; and you can't please everyone in this world.
As for mistakes and typos, I am extremely sensitive to those; honestly I don't remember them in your book.
I only mentioned this in my review, but I believe it has to do with the e-formatting. as that reviewer read it on paper, they shouldn't be there:
"The one negative thing I did notice had to do with the eformatting, many sentences or words cut in the wrong place, and some apostrophes facing the wrong direction, but the book was so much fun that it didn’t distract me."
I think the reviewer should have given some examples of the "many little silly mistakes".
But don't forget what they say at the end: "I did like the book, the setting, the plot".
now have fun and enjoy writing your next novel, we are all waiting for it!!

Crap forgot that you are an English teacher! My postcard is littered with bad grammar! I have to still get your book...I'm such a procrastinator. I owe the library 4.80 for a book I haven't read yet. I will try and download your book on my IPAD this weekend. BTW, don't listen to negative criticism, if Anne says it's good it's good!

Paulita, I think you should look on the positive side here. I am really impressed that someone in England reviewed your book. Wow that means it is really getting out there. From what you have said I don't think it sounds like a bad review. I think that some reviewers just feel that it is part of their job to point out some negatives. I totally agree with Sheila, this reviewer was holding out 4&5 for a blow your mind work of genius .... 3 is not a bad review at all.

Oh, so sorry, Paulita! As you know I utterly enjoyed Summer of France. Isn't it awful that one small negative comment can outweigh all your lovely and positive reviews in an instant? Criticism is no fun ever.
Reading Kelli's review, (who didn't give you a bad review, just not a great one) she says comes from an "English proofreading background". That tells me she is not just 'reading' but 'looking' at each page with a much more critical eye visually. If she's a proofreading professional she probably can't help herself. I don't recall typos; I suspect it was the e-formatting that was distracting. I read it on my Nook which produced some of the same issues but as a regular e-reader I know that irregular spacing can't be avoided, even when the publisher is a Random House, HarperCollins, Penguin etc.Like wordsandpeace said, keep writing the next one. We are waiting!

PS Forgot to mention I love the sunflower cover.

Emma, Lucia, Sally and Sim, You all are such good cheerleaders. I'm feeling buoyed by everyone's words of inspiration. Thanks.

I received one of those too. Since my book was an Ebook, I took it down, corrected the spelling mistakes and then put it back up. I had paid an editor too. My blog is full of errors all of the time.

I agree with Sheila that 3 out of 5 is an average rating.
I read lots of UK books and don't believe there are any different punctuation rules and yes we do use some different terminology but most of us understand these and that is the fun of different cultures.
Don't beat yourself up over this!!