(Sorry. I don't know why the print on this post is so aggressive!)

I wanted to share with you all a few books that I've enjoyed recently. I gave them both 4 stars on Goodreads. 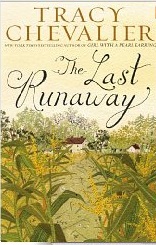 The Last Runaway is by Tracy Chevalier, author of The Girl with the Pearl Earring. I loved The Girl with the Pearl Earring, but Chevalier's other books  haven't lived up to that first publication. This one, The Last Runaway, comes close. The book focuses on Honor Bright, an English Quaker who decides to accompany her sister to America where the sister will be married. Honor Bright has recently been jilted by her own fiance. The trip over is horrific. Honor is so sick, she knows she would never survive the trip back across the ocean. Unfortunately, before they reach Oberlin, Ohio, Honor's sister dies. So there she is, in a new land without a plan for her future. The book does a terrific job with the character Honor. We really feel for her and how torn she is about slavery that she is confronted with in the United States. She has to choose between helping run away slaves and endangering her new-found family. I was afraid the book would become too preachy, but it avoided going there. Of course, slavery is wrong and illegal now, so there wouldn't be much point in preaching about the evils of slavery for most people. I loved the insight into the Quaker community. I recommend this book. 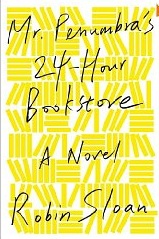 I also finished reading Mr. Penumbra's 24-Hour Bookstore. The title of the book is so cumbersome but ignore the title and give it a try. As I read it, I thought that my teenage boys might enjoy it, because, although the story is told through the main character Clay, it focuses on a 500-year-old mystery. Clay lives in San Francisco and is out of work. He takes a job at a 24-hour bookstore, working the graveyard shift where weird characters come running in during the middle of the night and breathlessly request the next book in the series. Clay has to climb a ladder stories high to find the book, which he is not allowed to open. When Clay meets a woman who works for Google, he tries to impress her by creating a computer generated map of the bookstore and he inadvertently solves the puzzle all of these characters spend years on. The goal of all the readers is to solve the mystery and they will live forever. The book was clever and fun, kind of a laid back National Treasure, but I will say that people who are searching to be immortal or a secret probably will not be amused by the way it ends: the answer to living forever isn't about being immortal.

The Last Runaway is on my list as well. Google has started underlining some words on my posts! most peculiar.