At the basketball scrimmage on Saturday, two parents asked who "that number 18" was. That was Spencer. They asked because they didn't recognize him, even though they'd sat beside me at games last year and invited Spencer into their homes for meals. 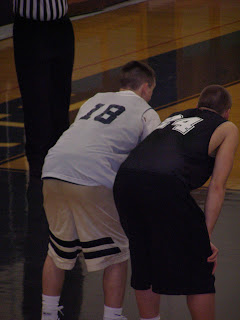 Since basketball season ended in April, Spence has put on about 30 pounds of muscle.
"He was so skinny last year," one of the mothers said, explaining why she hadn't recognized him.
It's true. When I saw him around the house, I thought he was normal sized. Tall, but normal weight. When I saw him on the basketball court, I realized he was a stick figure.
Not this year though.
Adding to the confusion of his appearance is a recent haircut. 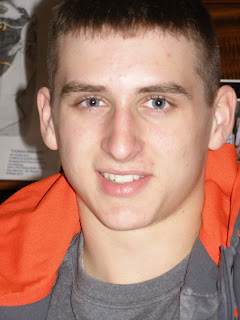 A senior on the team, short with a bald spot, told Spencer that he has an athletic body but a pretty boy haircut. Spencer trotted off to the barber for a "high and tight" cut to go with his athletic body. I'm not sure who made this senior boy fashion arbiter.
Spencer does have pretty boy hair. It's thick and smooth. And he still has a baby face.
The short haircut took care of that. Now he looks like a man.
Something about the haircut reminded me of my dad in his high school days, so Mom sent me some pictures. 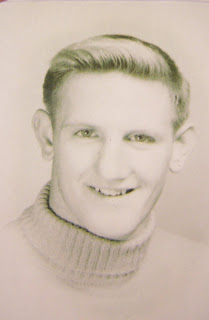 People have always said that Spencer and my dad look alike because of the blue eyes and the square chin. I thought the haircut might add to the similarities, but now that I compare. I'm not sure. What do you think? 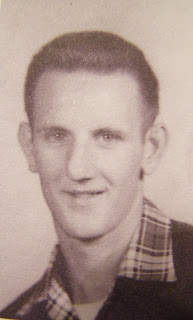 Here's Dad's senior picture and one from when he was Spencer's age.
The other thing about Dad and Spencer is they are both basketball fanatics. Dad didn't even hold a basketball until 8th grade but then excelled. He was offered a basketball scholarship to a college in Kentucky but turned it down to start working after graduation. 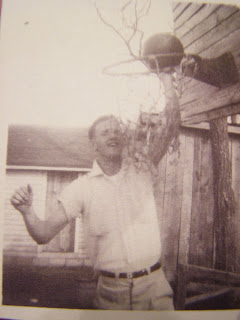 He has continued to play though, in a senior league and teaching his grandsons his hook shot until a shoulder injury a few years ago.
"You can just tell Gran was good at basketball," Spencer said when he looked at the picture my mom had sent.
As he flipped through the pictures, he looked at the one of my mom and dad together in high school. "People don't really marry people from high school, do they?" he asked. 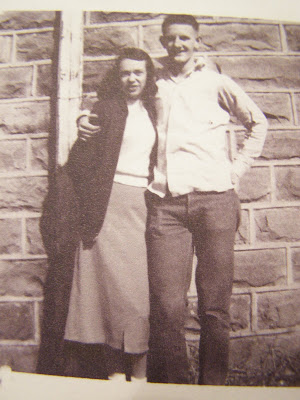 But, of course, they do and they did more frequently in the past, like his grandparents who met when they were in high school, when they were both still baby faced and had no idea that their future would lead to four children and seven grandchildren.
Maybe the story of high school sweethearts is a different story though, one that I'll have to tell about Tucker someday as he tries to reconcile now with the on-again, off-again girlfriend
at November 17, 2010

Yes they do look alike with a dash of Earl of course. Luv the new hair cut - it shows off his eyes and good looks much more.

I met my first husband in high school. I thought he was so cool. We didn't date then though. I also gained 30 pounds one year when I was young. Gained it when I was older too for that matter.

He does look like him in "same eyes" I think. Great photos...love the skirt with the socks.

Friend Anon, I can see you point, but I like his pretty boy haircut better.
Linda, Does the gaining weight have to do with the high school boyfriend? You just lost 20 pounds last winter. You make it look so easy.
Lucia, I know with the pictures. My parents lived in some sort of sit com age.

They look a lot alike, but I can see Dad in him for sure. I like the pretty boy haircut, also having met this "cool" senior, I can confidently confirm that he should have no say whatsoever in anything regarding fashion or style.