We're closing in on two weeks since Earl had his knee replacement surgery.
I'm sure it will all be worth it when we are hiking in the Pyrenees next year, but right now, he's still in a lot of pain.
He went into the hospital planning to have one of the three knee compartments replaced, but with the understanding that if the doctor got in there and saw that there was additional damage, then he would replace the entire knee. And that is what happened. The surgeon said there was a lot of damage to the knee cap.
The first few days, he didn't have much pain, but since he came home, he's been trying to stay ahead of the pain.
Nights are the worst, as he tosses and turns trying to find a comfortable position, or gets up to use the bathroom, his walker clanking along the floor.
After being home for a couple of days, he was dragging the walker along with him while he carried cups of tea or his computer. I suggested he switch to a cane since that seemed like it would be more helpful than just carrying the walker around.
The therapist comes to the house to keep an eye on him and help him get full movement back. She puts him through his paces and assures him that he is making good progress, although he doesn't feel like it.
The other day, the therapist was supposed to be here between 9 and 9:30 a.m. She hadn't arrived, so he moved to the dining room table to work on his computer. He was working on a story for the newspaper, even though he hasn't gone back to work. (Yes, he's that devoted.)
The front door was open so the therapist could come in when she arrived.
Earl grabbed a bag of frozen peas from the freezer to hold against the back of his knee where the swelling is annoying. He was walking without the walker holding the peas, which had melted and then frozen into a solid block again, when he saw the therapist coming up the stairs.
He turned toward me in a panic, not wanting to be caught walking without support.
"Catch the peas," he called as he hoisted the frozen bag toward me.
I looked up in surprise as the solid frozen vegetable caught me square in the chest.
I just put my hand over my heart and let out an ugh noise as the air left my lungs.
He hurried over to his walker as he motioned for the therapist to come in the house.
In addition to the bruise and raised bump on my breastbone,

the incident sent me to a flashback of a previous injury, which took place at Earl's apartment early in our relationship.
The year was 1988. We both worked as reporters for The Tampa Tribune. Earl had a get together for the reporters as we gathered at his apartment in the Old Northeast section of St. Petersburg, Florida.
I stood on the porch watching two of the guys throwing a Frisbee back and forth in warm spring sunshine before we headed to a spring training baseball game.
I was greeting another arriving reporter when I heard my name called. I turned my head toward Dave who had flung the Frisbee in my direction. As if in slow motion, I twisted around just in time for my nose to meet the plastic disk that sliced through the air. A crunch resounded on the porch as I moved my hands to cover my nose. Picture Marcia from The Brady Bunch.

As you can imagine, my nose was broken. I had one office visit where the doctor tried to fix my nose using a tool like a pair of pliers where he pulled on the bottom and tried to realign the bones.
The bones didn't come together straight though. Instead, they "tent-poled" with the bones forming a pointy peak, picture a witch's nose exaggerated.  The next step was nose surgery, where I received the very aquiline nose that I have now. 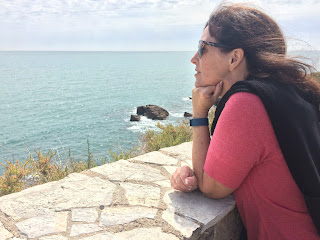 So all of that rushed through my mind as I placed my hand over my chest, feeling the bump that rose there.
I had to leave for work right after that, and truthfully, the frozen peas did not cause as much damage as the plastic Frisbee, but it is quite uncomfortable to wear my seat belt, and I don't think Earl is quite apologetic enough for the toss of the frozen peas that landed like an iceball to the heart.
I suppose with the knee pain that he is having, he can be forgiven for not begging my forgiveness. As long as it doesn't happen again.
at September 23, 2017

Ha! I've definitely complained and just shared the story on my blog, so I guess I'm not suffering in silence. Thanks for commenting.

Grim as all get out. Yes, I can imagine the flashback. Now, what I really want to know is who got to keep the peas -- you to take for your bump or Earl for his knee. I hope it was you!