I know our departure for France is only three months away, but I still get cravings for French experiences. That's what drove me to La Chatelaine here in Columbus on Friday morning to buy an eclair, which I shared with my husband, but it couldn't touch the luscious goodness of the eclair café (that's a coffee-flavored eclair) that I fell in love with in Quillan, France. There was even a day when I ate three of them!
But while I was at La Chatelaine, I saw a sign for  happy hour "charcuterie" platter only $9.
Charcuterie is usually served on a wooden cutting board with different types of sausages or dried meats, along with cheeses and slices of bread.
The sign, which said "charcuterie, cheese and escargots" inspired me. I had to teach until 2, but I convinced Earl that we should skip lunch and go after I returned home for an early happy hour.
I pictured the delicious charcuterie that we ate the first day we got off the train in Paris.
We had driven our rental car for two hours then sat in the train station a couple hours before taking the train from Monpellier to Paris, so we'd done a lot of sitting. I suggested to Earl that we walk from Gare de Lyon to our hotel in the Latin Quarter. According to MapQuest, it was a 30 minute walk, but a 30 minute walk with a suitcase wheeled behind and a computer game hung on my shoulder is longer than a normal 30-minute walk.
The clouds were dramatic as we first began to walk in the (hopefully) correct direction. 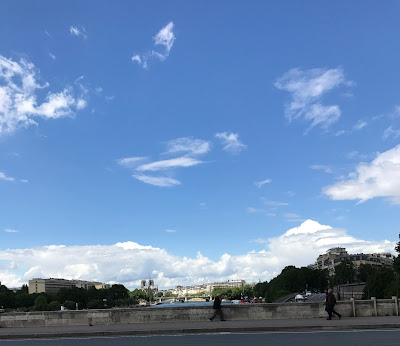 The day looked glorious as we started walking, but quickly turned ominous. 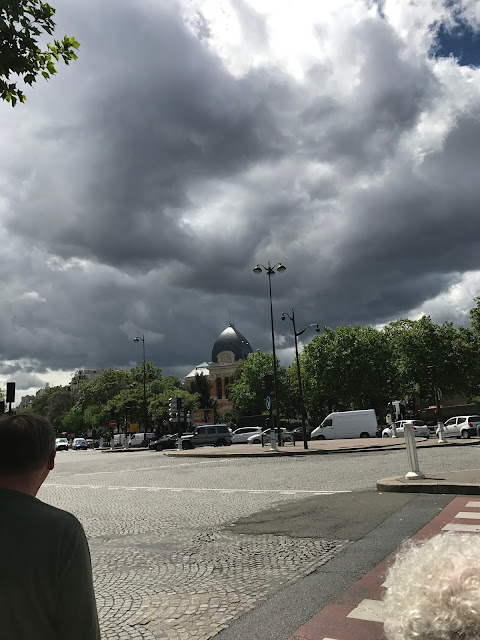 Just as fat raindrops began to fall on us, we wheeled our suitcases under an awning and settled into an outdoor cafe where we ordered a charcuterie platter.

We were not disappointed. 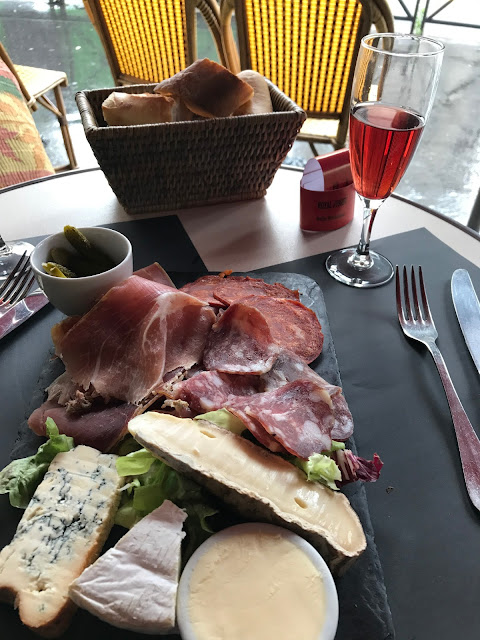 We ate and drank while the rain passed and then, satiated, we continued our walk to the hotel.
These memories were dancing in my head as I returned from work yesterday and picked up Earl. Grace was visiting so she came along with us. We settled Earl at an outdoor table since he's still walking with a cane since his knee replacement.
The waitstaff seemed confused by our request for the charcuterie platter. They called it the "char-took-erie." Then they went to ask the chef and he said he could make it but it would be 15-20 minutes. I shrugged and ordered us salads to eat in the meantime, along with glasses of Côtes du Rhone red wine.
Then, when the long-awaited charcuterie platter arrived, it looked like this. 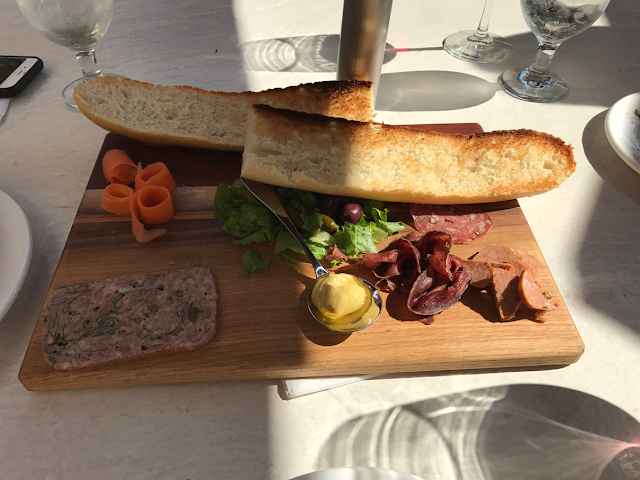 Sorry that the picture is half in/half out of the sun, but as you can see, the charcuterie platter has no cheese, no escargot, and barely enough meats to serve two of us -- a pale imitation of the charcuterie platter we had in Paris.
That's okay, in three short months we'll be arriving in Paris again, and I'm already imagining the delightful meals we'll have.
at September 30, 2017

I always go to La Chatelaine when I'm in Columbus visiting my friend. (Hopefully this fall!) The one on high street/23 just past the interstate (might be officially Worthington?). Your platter looks fabulous!

Suzie, I'm not an escargot fan either, but Earl likes it. Thanks for your support!
Jeanie, Yes, there is one in Worthington, but the one in Upper Arlington is closer to us.

The Columbus restaurant’s offering was somewhat deceptive, and the charcuterie platter definitely skimpy. To be fair though, if you only paid $9.00 for it, that’s about what, 7 euros? I’m sure your Parisian charcuterie cost at least twice as much. But there’s no denying that the Parisian platter was splendid!