Men are tricky.
I don't mean to lump all men into the same category, but as I review my life when men have approached me for affairs -- because they were married or I was married -- they somehow never came right out with their interest, but slyly hinted at it and made me feel uncomfortable and guilty.
I might have lost you, so let me start with the most recent example.
I have a student in one of my classes who makes inappropriate comments to me. It started with an innocent post I left on the discussion during the first week of class. I said that I enjoyed running. The first few weeks of class, this student, a native of Mali probably in his late 20s or early 30s, commented on that fact that I run and how great that is for my body.
I tried to change the angle and instead focused on how it helps me emotionally as well.
He stays until the end of class, after all the other students have filtered out,
When he asks a question, I try to respond with an example that includes a phrase like, "My husband says..." or "When my husband and I..." 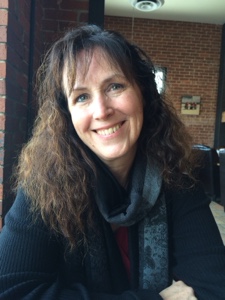 Then I tell myself that I'm imagining things. I'm old, and not in a Demi Moore kind of way.
The next week as he left class, I said, "Send me an email if you have questions," as I tell all of my students.
"Just an email?" he asked. "Can't I call so I can hear that voice?"
I kind of laughed awkwardly as he walked out the door. Then dropped my head to the desk. That was an opportunity to set him straight, but could I be making more of it than it was?

Last week, again he was the final student in class; I instructed him to make sure he got tutoring from the students in the library. "But why can't you tutor me? You already know my weaknesses."
I sputtered some excuses, and he agreed to get tutoring. As he began to leave, he walked to the front of the class, equidistant between my desk and the door.
"I feel like hugging you but it's not okay to hug your teacher."
"That's right!" I jumped in quickly. "That wouldn't be okay."
He stepped out into the hallway and blew kisses back at me with both hands. I shook my head.
Perhaps this student simply appreciates me as a professor and I've read the messages wrong. I considered bringing my husband along with me to sit in class. I thought maybe I should mention it to the dean to let him know I'm uncomfortable, but so far, I've done nothing.
Next week is the final class, so I'm hoping to brazen my way through it.
But as I finished my next to last class on Tuesday evening, my student completed his work and walked toward the front of the room. He asked a few questions about studying for the final next week. Then he moved closer and said, "I just feel like I need a hug. You're always supportive."
"No," I said quickly. "I'll give you a handshake" and I reached out a hand but he went in for the hug. My heart started to race and I looked toward the hall, wondering if anyone was around if I needed help. I pushed against the student where his arm and shoulder come together until he backed off.
"But why?" he asked.
"It's just not appropriate," I said.
And it left me feeling slightly violated.
I called my husband as I walked out to the car. He'd seen my original version of this blog post.
"You need to talk to someone," he said.
"I think maybe he just doesn't get it though," I said.
"Then somebody needs to explain it to him," he said.
As I was thinking about the actions and words of this student, it reminded me of another time a man's actions surprised me.
I was 18 the first time a married man ever propositioned me.
My brother had just gotten married the day before. His best man and I had agreed to go to his apartment and clean up, stack the presents, put away clothes strewn in the giddiness of a couple leaving for their honeymoon.
Marcus and I picked up and then we were finished.
"Okay, that's everything," I said. "We can go."
"Unless you don't want to go," he said raising his blonde eyebrows suggestively.
"Why wouldn't I want to go? We're finished," I replied.
"You know." He tipped his head toward the bedroom.
"No!" I responded. And afterward, I tried to convince myself I'd misread that situation too. Surely my brother's friend, a married man, hadn't meant what I assumed.
When the kids were little and I stayed home with them, a male neighbor suggested that we should spend more time together. I had the presence of mind to say that my husband and I had some free time in the evenings. But again, the suggestion was just subtle enough that I could convince myself I might be wrong about it.
Men need plausible deniability, I suppose. They can always claim they didn't mean what I thought.
But somehow, the way they do it, makes me think I'm somehow at fault.
I should have been stronger, more firm, more independent and they would never have approached me.
Maybe it's time to stop blaming myself and go with the fact that men are tricky.
at February 16, 2016

Your post brought to mind an interesting legal case taking place currently in Toronto concerning a local TV celebrity. He is guilty as hell but will walk because he has an excellent female (yes, it shouldn't matter) lawyer ( I would want her too) and the court is allowing her to walk all over the female witnesses.

Jackie and Diane, thanks for the support. I'll look at the case before I go talk to the Dean today!

I totally understand what you are saying Paulita. You absolutely hold no blame in the situations you mentioned and were quite clear on your position. I've experienced "tricky" situations as well but was not as capable of responding with directness; perhaps my personality or being raised to be polite or a fear of confrontation and of course the fear of reading the situation wrong. Thank you for your topic. I appreciate your view on many things.

Just Me, Thanks. I feel fortunate to have gotten to my age without experiencing these feelings before.

I have not experienced any such feelings, for that I am thankful. I am sorry they are happening now. Hopefully, you will get some sort of support from the Dean.