Only one year, 103 days until my husband and I plan to move to France. So I have another French book to give away to a reader as I clear our shelves.
This one is Taking the Cross by Charles Gibson. I received this one from FranceBookTours and my husband reviewed it on my blog. Here's his review of Taking the Cross. 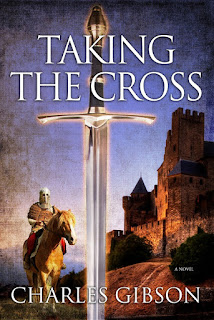 Here are a few lines from him describing the historical novel:


Gibson’s interest in history wins out in a well-written account of sacrifice in the face of religious intolerance.
Early in the 13th century, Pope Innocent III wanted to solidify the Catholic Church’s hold on Christendom. In that era that meant converting heretics — basically anyone, including Christian sects — who didn't follow Rome’s interpretation of Catholicism. Failing that, there was always the crusader’s sword.

The suspense and action of battle will give the hardiest reader of war stories the shivers. The violence is graphic but not gratuitous and is true to the age.

This one is set in Languedoc, the area of France that we plan to move when head to France.
If you'd like to read this historical  novel, or if like me, you think your husband or partner might enjoy it, sign up below to win.
Leave a comment and then make sure you click on the rafflecopter button to say you left a comment. There are some other options for entering to win too if you want to increase your chances.
a Rafflecopter giveaway
at February 07, 2016

I studied French in high school and college, but can't speak or write it, sadly! I love the sound of the French language, though. How adventurous of you to move to France!

Laurie, Thanks. Even though it's a year away, I'm still getting nervous about it.

I am presently learning French. It is taking me forever but still persevering. I guess the best way to learn a language is to immerse oneself in the language. I have visited various cities and places in France and enjoy the food and wines, the architectures and the landscape.

In December I had the opportunity to review the interesting memoir written by Linda Kovicskow entitled "French Illusions" under France Booktours and I am currently reading her second memoir.

Good luck to your move to France. It sounds exciting
Cheers,