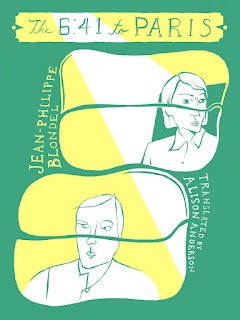 The 6:41 to Paris is written by Jean-Philippe Blondel and translated by Alison Anderson. It's named after the train to Paris that Cécile catches on a Monday morning after she spent the weekend visiting her parents' home in rural France. A man she once dated, 27 years before, comes down the aisle and sits next to her.
Their inner monologues cover the relationship, the breakup and the lives they've led since then before they finally speak to each other.


No one every warned us that life would be long.Those easy slogans that make your heart beat faster, like "carpe diem" or "die young" -- all that stuff was just nonsense. No one told us, either, that the hardest thing would not be breaking up, but decay. The disintegration of relationships, people, tastes, bodies, desire. Until you reach a sort of morass where you no longer know what it isyou love. Or hate. And it's not as unpleasant a condition as you might think. It's just lifelessness. With scattered spots of light.

I like the description of these thoughts, but I'm terrified that I could end up like these two! Their feelings for each other, their thoughts about the lives they've led are sad.

But Cécile has done more with her life than Philippe. She has less to regret but a stronger since of hatred and embarrassment.

I have this boldness in me. Deep-rooted. I stifled it for years, smothered it to keep it buried, but it comes out with the explosiveness of a champagne cork whenever I feel a certain pressure, the way I did then. Now I know how to use it to my advantage. It's very useful in meetings, negotiations, sales contracts. Sometimes it makes my colleagues or competitors blush, but basically they like to see a display of nerve. A sharpness of tone. The sharp edge of the guillotine.


This book has some lovely writing and delves deep into relationships left behind. 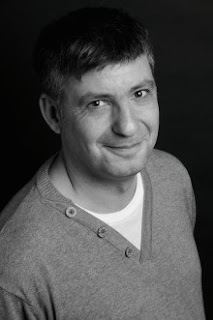 Jean-Philippe Blondel was born in 1964 in Troyes, France where he lives as an author and English teacher. His novel The 6:41 to Paris has been a bestseller in both France and Germany.

Alison Anderson is a novelist and translator of literature from French. Among the authors she has translated are JMG Le Clézio, Christian Bobin, Muriel Barbery and Amélie Nothomb. She has lived in Northern California and currently lives in a village in Switzerland.
Follow New Vessel Press on Twitter | on Facebook
Sign up to receive their latest news and deals.
Buy the book | on Amazon

Visit each blogger on the tour: tweeting about the giveaway everyday of the Tour will give you 5 extra entries each time! [just follow the directions on the entry-form] Global giveaway open to US residents only: = 2 participants will each win a print copy of this book.

I read this quite a while back. Very interesting book.

thanks for your nice review, glad you liked it. I agree that there's definitely a difference between English and French books, at least among contemporary writers! Emma at FBT

This book was such a wonderful surprise. I am glad you liked it, too.