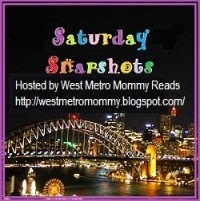 Today, I would like nothing more than to merely post a photo of the leaves turning brilliant colors. I was afraid the  leaves were simply going to fall off without changing, but I was wrong.
Here are a couple of trees near my house. The leaves have turned an orangish red that looks almost pink in some lights. 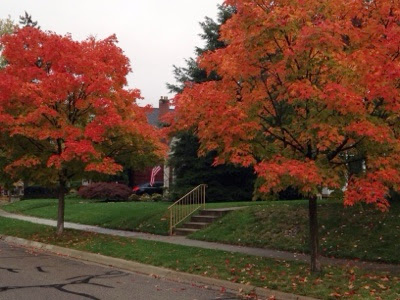 But my thoughts are on a more somber subject.
This week, I found out one of my college students died. "Passed away" was the wording they used in the email I received.
Elisha (pronounced like the Biblical prophet) was in my class this summer and again this fall. (Two different classes.) He was tall and slim. He loved football and planned to try out for a spot as a running back in the National Football League, even though he didn't make the team in college.
He came to my class after two years at another college. I was surprised that his writing was full of run-on sentences. We sat together that second class and read through his writing. I taught him that he paused naturally where the sentences needed punctuation. We kept working on it throughout the semester.
He finished class early, completing all of the work for the course before the end. And he moved on to the next class in September, which I also taught.
A few weeks ago, I asked him what was going on. "You aren't getting all the work done ahead of time like last semester."
He shook his head and promised to do better.
I didn't know what was going on with Elisha. I didn't understand then that this 20-year-old guy had started hanging out with a new crowd.
I didn't know that until I saw the newspaper story.
The story began by saying Elisha's parents filed a missing person's report when he didn't come home Saturday morning. He always came home. It was not in his nature to stay out all night.
I have a son the same age as Elisha, and he had stayed out all night the weekend before when he came home from college. I texted and called him until he finally responded that he had spent the night at his friend's house.
So immediately, I felt a kinship with Elisha's parents. Here we are trying to raise our sons past this tricky phase of life when they think they're independent but they're still making some very questionable choices.
My son has gotten himself into some trouble, but his choices haden't ended him where Elisha's choices did.
Elisha was with three other guys when two of them went into a store and robbed it. A SWAT team was waiting for them, and two of the guys were killed. Elisha was one of those.
I don't know if Elisha was a robber or if he was in the car. I don't know if he had a gun.
I do know, from the news story, that he had never been in trouble before, only traffic tickets.
Yes, he did make an awful choice, and that choice ended his life.
I just wonder how many times boys make decisions that bring them to the brink of death, that allow them to slip past narrowly.
I want to reassure Elisha's parents, that I believe he was a good kid who made some bad decisions at the end. But when I picture going to the funeral, I'm afraid they might have an open casket, and I keep picturing the slim shoulders of this boy sitting in my classroom.
And then it's only a tiny step to imagine that my own boys are squeaking past bad choices. No, they aren't tempted to rob stores or commit other crimes, but they all make stupid decisions.
I don't want to dismiss what Elisha and his friends did.
I just think 20 year olds don't think very far ahead; they don't see the consequences.
at October 18, 2014

Sean @ His And Her Hobbies said...

The colours of the trees changing are always so colourful and I love the photo. I'm sorry to hear about your student. It's a somber story and a reminder that we need to think of the consequences of our actions.

Sean at His and Her Hobbies

Thank you for sharing your beautiful photo, along with the story of Elisha. So sad. I'm sure we can all look back on stupid mistakes we made but were lucky enough to survive. But 20-year-olds think they're invincible.
My Saturday Snapshots are from the Cinque Terre, Italy.

It's true. Twenty-year-olds have not developed that frontal lobe enough to make always good decisions. It takes time. So sorry for your loss. When you are a teacher, all your students must in some way feel like your own children. Hope that you week is better and thanks for the gorgeous trees.

Lovely autumn colours. I am very sorry to hear that your college student died.

We're having a late and slow fall, but I took a drive today and saw more color than I thought I met.

So sorry for the loss of Elisha. Living in St. Louis County, I've been experiencing with my community a lot of sadness at young promising lives cut short. Teachers like you are one of the answers. Please keep doing what you're doing.

Thank you for your posting honoring Elisha and letting his parents know his story has been told and their loss is shared by those who knew him as well as complete strangers. My heart breaks for them.

What a tragedy. Bringing up teenagers is really hard.

I loved the changing colours Paulita, and I love to see a pile of leaves and kick through them , I know I shouldn't but just cannot help myself.

I am so sorry to read the sad news of a pupil of yours, sometimes it is hard to even know what is going through the minds of 20 year olds. A tragic story , and I feel for everyone.

Such a sad story of your former student.

This is so sad. A dumb decision with dire consequences.

Thanks to everyone for your kind words. I guess we just keep working to get other students safely through these early adult years.