Autumn is my favorite time of year, but I've had some new insights into this season in the past few weeks.
I go for a run early in the morning while it is still dark, and October had barely begun before I started to feel the morning get a little creepy. Only a few leaves had fallen, but I could hear them, their dried carcasses scuttling along the street as the autumn wind blew. I knew it was only fallen leaves blowing, but I understood why Halloween was scheduled in October.
Then last week came the lunar eclipse, which was an awesome thing.
When I headed out the door around 5:15, the eclipse hadn't officially begun. The moon looked bright and round. I chased it for nearly an hour, watching as a bigger and bigger bite was chomped from the circle.
Finally, only a sliver remained, like a sideways Cheshire cat grin. 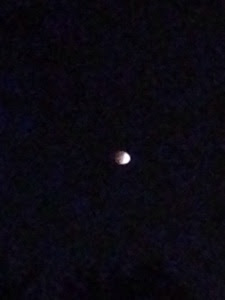 Before I turned my back on the moon to head indoors the moon had become a faint round glow. It was supposed to look red, but barely stood out against the dark sky.
I wondered what early people thought on one of those mornings when the dry leaves skittered across the ground like so many unseen creatures and suddenly the moon began to disappear. No wonder they would make sacrifices and call out to unknown gods. That stuff is scary.
This week as I ran, accustomed to the darkness and now careful of the leaves on the ground, which had become wet and slippery, I got to see Halloween decorations that my overzealous town inhabitants have draped their houses with. Orange lights are very popular, as are spider webs looking like clouds that landed in people's bushes.
Part of my run in down around a cul de sac. It's one of the more isolated sections of my run, and a street light along there seems to go dark every time I run past. It's like one of those motion detector lights, but it apparently goes out whenever I run near.
So I was concentrating on the dark street when I noticed to my left someone walking in a front yard. The person carried a flashlight and wore a long white gown. I couldn't really see the person's face but got the impression he/she wore a hat.
I wasn't too startled. I frequently see newspaper delivery people walking along the yards. It wasn't until I came back to that same road about half an hour later  and the sun shone bright enough that I saw two "ghosts" flapping in the 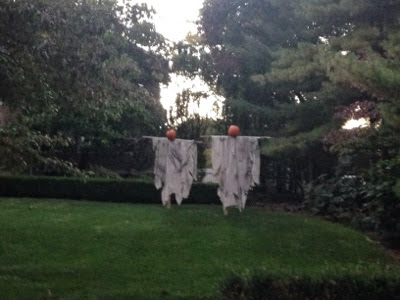 wind and I began to wonder if the person I saw out in they yard had been trying to scare me by acting like a ghost too.
But I wasn't scared because ghosts don't carry flashlights, and I didn't even see the pumpkin-headed ghosts waving on their clothesline.
So my autumn is full of new and possibly scary things, but I spent my summer sitting on the couch recovering from a foot injury, so I know that even scarier than running in the dark in the early morning, is doing nothing and growing out of shape.
So here's a photo of the brighter side of life from a walk I took with my friend Sheila. The fallen leaves, wet now, but still coloring the sidewalk like so much confetti. 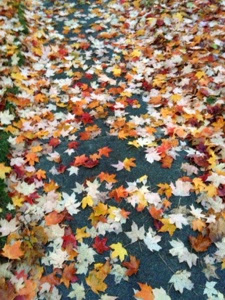 pretty good capture of the moon! I love this time of year!

The scarecrows and leaves on the pavement are really great.

Great pictures. I also watched the lunar eclipse while running. It was an unexpected treat. I happen to love the dark mornings for some crazy reason.

Loved your post today. I could see and hear all the things that go "bump" in the night ( or early morning as the case may be)! Thanks for putting a smile on my face.