The Casual Vacancy -- A Review

Well, I did it. I finished all 503 pages of J.K. Rowling's first adult  novel, The Casual Vacancy.
If I rated books out of 5 stars, I'd give this one 3 stars. The first 100 pages were deadly dull and confusing with all the unrelated characters. As the characters came together, the plot moved along more quickly.
People who've read the Harry Potter series might think Rowling didn't veer that far from her original series with this book. Some of the main characters are two teenage boys (one of whom is an orphan who was adopted) and two teenage girls. They're all unhappy with their lives and find ways to get back at their parents. 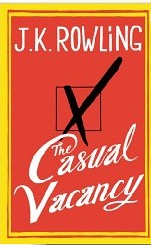 But the main focus of the book was truly income and education inequality. One of the characters is a crass, poor teenage girl with a drug-addicted mom. The girl is made more lovable with her devotion to her toddler brother.
The middle and upper class characters have these fake worries in their life, like who will win the open seat on the town council, while the poor characters struggle to survive. The teenagers are self-absorbed and cruel.
Rowling's book did not become preachy, but perhaps it was her effort to avoid preachiness that caused it to be devoid of emotions. A good book should make the reader feel many things. This one didn't, even as tragedies unfolded at the end.
Although the book didn't evoke emotions, it did make me think more about what the middle and upper classes owe the struggling lower class. Rowling lived a life on the British equivalent of welfare, so she understands the differences between surviving and thriving. Here, she makes a point of showing us that the poor live a very different lifestyle, one that most middle-class people judge and can't begin to imagine.
If I saw a kid drowning, I would definitely save him. Shouldn't I reach out to those kids who I might not see drowning, but who are still struggling in a different kind of river?
at January 17, 2013

This is really worth reading, it has too much details in it and yet it is so simple to understand.