A few months ago, Clay, a fellow teacher invited me to speak to his writer's group.
I agreed and didn't worry too much about it, until he included me in the email to the group. The email said they would schedule about an hour for me to talk.
Gulp.
Me? Talk for an hour about anything? Nothing?
I was suddenly nervous.
I emailed my author friends and asked them -- what do I talk about?
But I needn't have worried. The group was supportive, welcoming and curious.
It wasn't at all like me speaking to them or lecturing them. It felt more like a group discussion. During my part of the agenda, I brought up some points and everyone shared their thoughts on it. Sometimes the discussion veered off the road, but we generally got things back on track.
One thing I had planned to do was read from my novel, The Summer of France. Afterall, publishing the novel was got me an invitation to the group.
Although I talked about the novel, where the idea came from and how it evolved, I never actually read from it.
Have I told you that story? 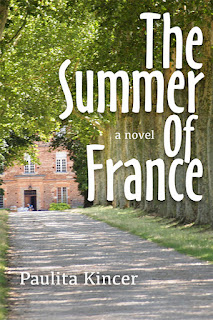 My book started out with the idea of a couple escaping from their everyday life to run a bed and breakfast in Mackinac Island, Michigan. If you haven't visited Mackinac Island, you should. It's an island that's reachable by boat and doesn't allow cars. It's full of horses and carriages, along with bicycles. And it's famous for its fudge.
My husband and I even went to stay in a house that might be turned into a bed and breakfast. I was going to call the novel, Fudge Ho!
So that idea evolved into a novel about an Ohio woman, Fia, and her family who go to Provence, France to run a bed and breakfast for the Fia's great uncle. The great uncle married a Frenchwoman after World War II, but he is hiding from a war secret.
As you can tell, the idea changed quite a bit, but I'm thrilled with the results. If you haven't read it yet, I hope you will.
You can buy it in ebook form or paperback on Amazon. The Summer of France.
The discussion yesterday didn't focus only on my novel though. We tackled the tough subjects like the state of the publishing industry.
I left feeling invigorated and supported, plus the group bought five of my paperbacks that I'd taken along.
The next time I'm invited to speak, I'll definitely feel less anxious.